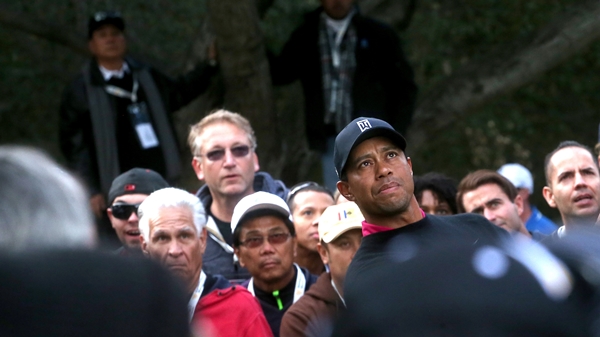 He only missed one fairway Friday in the World Challenge. He putted for birdie on every hole. Only once was he under stress to make par. And when he finished his second round with a pair of pars, Woods matched his course record with a 10-under 62 and was in a familiar position going into the weekend.

Woods, a five-time winner at Sherwood, had a two-shot lead over Zach Johnson.

“It was fun to watch,” said Graeme McDowell, who tied for the second-best round of the day and fell six shots behind.

Woods was at 11-under 133 and will be paired in the last group Saturday with Johnson, who missed a few good birdie chances on the back nine but still managed a 68. Johnson is a two-time runner-up at the World Challenge, both times to Woods.

Matt Kuchar had a 68 and was three shots behind, and no one else was closer than five shots.

Woods had little reason to believe he would tie his course record at Sherwood, which he set in 2007 during one of his victories. Nothing was going right on the practice range. And even though he opened with two birdies, the pin was accessible on No. 1 and the second hole is a par 5 that featured a front pin.

“I hit a good tee shot down No. 1, good second shot in there to a kick-in, and it still didn’t feel very good,” Woods said. “But think the third hole was a nice shot in there. It was the first swing I made, even during warm-up, that felt really good, and I tried to keep that feeling the rest of the day. And I did. I hit a lot of good shots after that.”

This is his final event of the year, though Woods has been around long enough to keep it in perspective.

No one is ready to concede this tournament to Woods, except for those at the far end of this 18-man field. Hunter Mahan had an 80, Dustin Johnson had a 79 and Rory McIlroy, coming off a win at the Australian Open, had a 77.

“Amazing what Tiger did out there. It’s just some incredible golf,” Kuchar said. “I kind of felt sorry for Graeme McDowell. I saw he posted a 5-under-par round, and it must have felt like it was 2 or 3 over. It’s tough when you’re paired with a guy like that. It makes you feel like you’re not doing much. But the rest of us just go about our business.”

Even after watching what he felt like was an exhibition _ Woods’ golf, not the tournament _ McDowell figured he could still defend his title if he could nail down the speed of the greens, which are running on the fast side.

That’s what set Woods apart on another chilly day at Sherwood. Not only did he make the putts, he rarely was in a position where he had to stress over par. The lone exception came on the par-3 12th, when Woods was in such a precarious spot above the hole that he had no intention of trying to make birdie. He would have had to start the ball high on a ridge to get it to roll near the hole, and that would mean more speed going by. So he aimed for the low side and made the 10-foot par putt coming back.

“I don’t think I’ve seen them quite this fast unless we get Santa Ana’s blowing when it’s dry,” Woods said. “I mean, this is the last tournament of the year for a lot of us. I’d think they’d make it a little easier on us. But they gave it to us pretty good the last couple days. You miss the ball in the wrong spots, you’re making bogeys.”

Woods never went more than two holes without a birdie. One of the few times he was above the hole, Woods hit his putt on a perfect line with the right pace and dipped his knees when it dropped in the right side of the cup.

Even as he dropped further behind, McDowell couldn’t help but appreciate a flawless round of golf.

“I enjoyed that,” he said. “It was cool to see that kind of golf. He was under control. He hit it down the middle of every fairway. He didn’t have that kind of violence with his speed through the ball.”

Woods said he was similar to the 61 he shot this summer at Firestone, where he went on to win by seven shots.

“I think Firestone is obviously a much more difficult golf course than Sherwood,” Woods said. “But as far as quality ball-striking, I hit it equally as good today, if not even better.”

What could challenge Woods, along with everyone else, is a forecast of rain and then wind for the final two days.