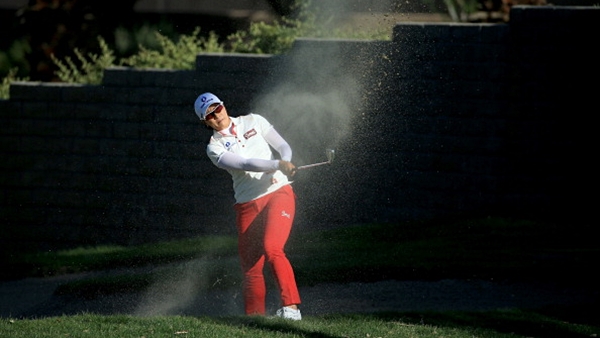 KAPOLEI, Hawaii – South Korea’s Se Ri Pak, Hyo Joo Kim and So Yeon Ryu each shot a 4-under 68 on Wednesday for a three-way tie atop the leaderboard after a breezy first round of the LPGA LOTTE Championship.

Kim, the 2012 China Ladies Open champion, had five birdies. She had her only bogey on her final hole of the day on the par-4 9th.

“Except for the very final hole here, the putting in general was really good for the day, so I was really happy,” Kim said.

Ryu, the 2012 LPGA Rookie of the Year, got off to a nice start in her morning round. She birdied three of the first five holes, teeing off from the front nine into the wind. She finished with five birdies and one bogey.

Ryu said she was able to clear her mind with a week off after a bad result at the Kraft Nabisco Championship, where she tied for 46th.

“I really don’t think about score or my performance. I just focus on the present, not worry about any (potentially) difficult holes,” Ryu said.

Japan’s Ayako Uehara was one stroke back.

The field of 144 starters contended with winds gusting about 20 mph throughout the day, according to the National Weather Service.

Top-ranked Inbee Park shot a 2-under 70 and was tied for fifth.

“I got off to a really good start today. Obviously, the wind wasn’t blowing as hard for my first five holes,” Park said. “The greens seem a little bit more slippery and I had troubles on the back nine controlling the distance. You have to have perfect contact to ride the wind.”

Local favorite Michelle Wie had a 70 after carding a bogey on her first hole.

“It was quite windy out there today,” Wie said. “Just started off with bogey, but just kind of hung in there. I just was patient all day today. It felt good.”

Wie returns to her hometown after a runner-up finish at the first major championship of the season, the Kraft Nabisco at Mission Hills.

Jennifer Kirby of Paris, Ont. got off to a great start Wednesday, opening with an even-par 72 to sit tied for 14th.