Three share lead after first round at Volvo China Open 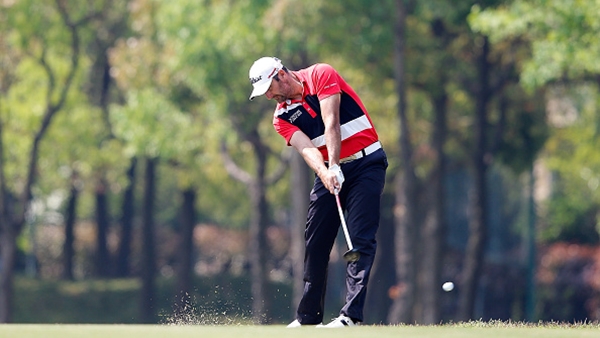 SHANGHAI – Most golfers at the Volvo China Open had trouble keeping their approach shots from flying off the firm greens at Tomson Golf Course on Thursday.

For a trio of European Tour veterans playing some of their best golf at the moment, the difficult conditions didn’t pose too much of a problem.

Michael Hendry, Bradley Dredge and David Howell all shot a 4-under 68 to top the crowded leaderboard after a first round in which low scores proved difficult to post.

Hendry and Dredge were the only golfers to complete bogey-free rounds, while Howell had one bogey to go with five birdies.

“The greens were really firm so the big thing was if you were hitting fairways, you had chances on the par 5s and short irons,” said Dredge, a 41-year-old Welshman. “It was never easy getting the ball close to the hole with slopes on the greens and the firmness, it was quite tricky around there.”

The three were a stroke ahead of defending champion Alexander Levy and Julien Quesne of France and Marcus Fraser of Australia in joint-fourth.

China’s top player, Li Haotong, and Thailand’s Kiradech Aphibarnrat both shot 71 to sit in tie for 14th. Last Sunday, Kiradech beat the 19-year-old Li in a playoff to capture his second Euroepan Tour title at the Shenzhen International.

For Dredge, the new season has brought a return to the European Tour after he lost his card at the end of 2012. He played his way back into form while dealing with injuries and illness and regained his playing privileges with back-to-back runner-up finishes in a two-week span in August.

“It took a while to recover from an operation I had at the back end of last year,” he said. “But I’m fighting fit now and starting to play much better so that bodes well for the rest of the season.”

The 35-year-old Hendry is also playing confidently at the moment after a win last week in the season-opening event on the Japan Tour, which earned him US$215,000 and vouchers worth a year’s supply of rice in Japan.

“I think it’ll take me about a decade to get through,” the New Zealander joked. “It’s a funny game, golf. When you are in form, you’ve got to try to make the most of it because you spend most of the time out of form.”

Howell is looking to build on two top-5 finishes over the past month and a half – he tied for second at the Joburg Open in March and fourth last week in Shenzhen. His last win on the tour came in 2013 at the Alfred Dunhill Links Championship.

The 39-year-old Englishman said that even though he played well last week, the conditions in Shanghai are posing new challenges.

“We knew it was firm in practice and it was hard to work out how difficult it was going to be,” he said. “I drove the ball beautifully today, really found my rhythm on the range and took that onto the course very nicely.”

Li rebounded well from his disappointing near-miss last week to post a solid first-round score. He had been leading by two strokes on the back nine in Shenzhen on Sunday when Kiradech made an eagle on his penultimate hole and then captured the title on the first playoff hole.

“I’m pretty satisfied with my game, especially the last two rounds (in Shenzhen). I couldn’t complain about anything,” Li said through a translator.

Among the other Chinese golfers in the field is Guan Tianlang, who made headlines two years ago when he became the youngest player ever to make the cut at the Masters at the age of 14. Now 16, Guan had a triple-bogey on par-4 11th hole to sit in 76th place after a 75.