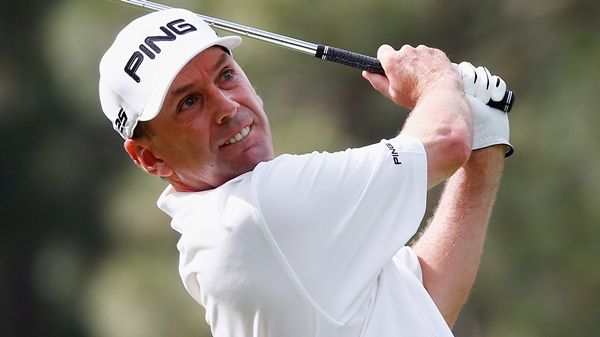 CALGARY—Kevin Sutherland, who became the latest professional to shoot 59 and first on the Champions Tour, will lead a group of three that have fired golf’s magic number into Calgary to tackle the Canyon Meadows Golf and Country Club for this year’s Shaw Charity Classic in just one week’s time.

Sutherland went where nobody has ever gone on the Champions Tour breaking the 60 mark on the scorecard over the weekend by firing a sizzling 13-under par round, which included 12 birdies, one eagle and one bogey. The lone bogey came on the final hole of the par-72 En-Joie Golf Club in Endicott, New York.

“Amazing round. Obviously I played really well. I was just in my own little world,” said Sutherland.

The 50-year-old Champions Tour rookie was greeted on the 18th hole with a standing ovation and many of his fellow Champions Tour players who rushed out to the green to witness this historic moment.

“The response I got when I came up 18 I have to admit gave me chills. I guess if your Jack Nicklaus or Arnold Palmer you get used to that, but when everybody stood up around the green and was clapping, I got some chills,” said Sutherland, whose low round on the PGA Tour coincidentally came at the 2010 Canadian Open when he shot 62. His lone PGA Tour victory was at the 2002 World Golf Championships Match Play Championship.

“To have the players behind the green giving me hugs and high fives, hand shakes and congratulations, that stuff means a lot and that is the stuff I’m going to remember most today.”

One of those players standing behind the 18th green to watch Sutherland complete his near flawless round was his best friend on Tour, and another member of golf’s 59 Club, Paul Goydos.

Goydos will join Sutherland in Calgary later this month – both in search of their first Champions Tour victories. Goydos became the fourth player in PGA Tour history to card a 59 when he made history himself in the opening round of the 2010 John Deere Classic. A Champions Tour rookie, Goydos has two PGA Tour titles: 1996 Bay Hill Invitational and the 2010 Sony Open in Hawaii.

Rounding out the trio of the 59 Club members that will swing into Alberta’s foothills for the second annual Shaw Charity Classic, August 27-31, 2014, is Chip Beck.

One of the Tour’s most colourful characters, Beck shot his 59 in the third round of the 1991 Las Vegas Invitational at Sunrise Golf Course. A four-time winner on the PGA TOUR, Beck also represented the United States on three Ryder Cup teams. Beck was part of the 81-man field that competed in the inaugural Shaw Charity Classic one year ago.

Tournament officials will announce the complete list of players that will tee it up in Calgary during a media conference on August 20.