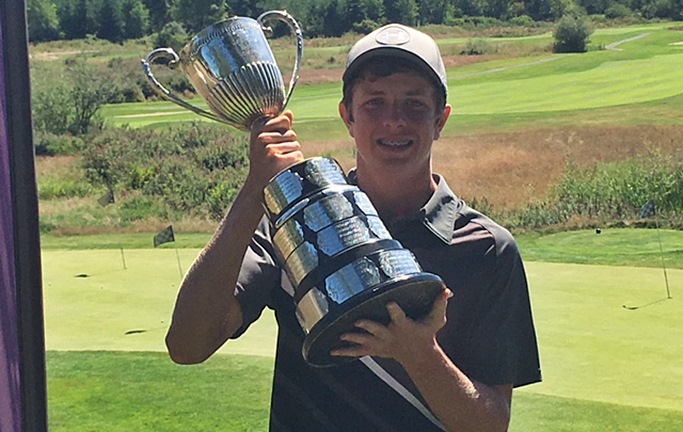 Qualicum Beach, BC – Fifteen-year-old Nolan Thoroughgood did not choke under the pressure, even though he himself thought he would. Instead the young man hung on for a 2-shot victory over Coquitlam’s A.J. Ewart, just 17-years old himself, in the 114th BC Men’s Amateur played at Pheasant Glen Golf Club.

Zach Anderson from Nanaimo finished in 3rd spot at 4-under, 1 shot back of Ewart. The Three will now make up BC’s Willingdon cup Team for 2016.

History was made at the 114th playing of the B.C. Amateur Championship. Twice. The tournament began with the legendary Doug Roxburgh teeing it up in his 50th straight B.C. Amateur. It ended Friday with the championship trophy being raised by the event’s youngest ever winner.

Nolan Thoroughgood, a 15-year-old Victoria resident who was competing in just the second four-round tournament of his young life, played with the poise of a seasoned veteran at Pheasant Glen Golf Resort. He closed with an even-par round of 72 for a 72-hole total of seven-under par to win by two shots over another promising junior, 17-year-old A.J. Ewart of Coquitlam.

Thoroughgood shot a five-under 67 in Tuesday’s first round at Pheasant Glen, but no one — not even Thoroughgood and his father Garth, who caddied for him — expected he would go on to win. “I didn’t expect to shoot five-under the first round,” Thoroughgood said. “I kind of expected myself to choke the second round. Didn’t. Kind of expected myself to choke in the third round. Didn’t. Today I didn’t expect to win, but I did. It still doesn’t really feel real.”

When he hoisted the championship trophy, the sun reflected off more than the shiny silver chalice. It also bounced off the braces worn by the smiling champion. Thoroughgood broke Adam Svensson’s record as youngest winner of the event.

Svensson, a Surrey resident who is now competing on the Web.com Tour, was 16 when he won the 2010 B.C. Amateur at Castlegar Golf Club. “That’s pretty cool,” said Thoroughgood, who turns 16 next month. “I still have to play the B.C. Juveniles.”

He will now play a lot more than that. His win gives him a spot on B.C.’s three-man Willingdon Cup team at next month’s Canadian Amateur Championships in Ottawa with Ewart and third-place finisher Zach Anderson of Nanaimo. He will also get a spot in the Canadian Junior Boys’ Championship, which goes Aug. 1-4 in St. John’s, Nfld.

Thoroughgood held his young nerves together for most of the round. He finally showed some butterflies on the 18th green when he raced his birdie putt eight feet past the hole. He missed his par putt and had to settle for bogey.

He also got a break with his tee shot on the par 5 10th hole, when he hooked his ball into the trees. “I was nervous on 10 because I knew I was two strokes up on Zach and I hooked one into the woods and I was like ‘oh, God, this is where I derail.’ But it kicked out and I was able to make birdie off a scenario that could be been a lot worse.”

His dad Garth was living and dying on every swing his son took. The two embraced for several seconds after Nolan sunk his final putt. “I am a little awestruck,” Garth Thoroughgood said of his son. “He kept his head all day today. I don’t think I helped him at all. I checked in with him, bumped knuckles, but as far as his nerves went, I think the first time I saw nerves was when he hit his putt long on 18 and missed the next one. I am just amazed he managed to pull that one together.

“His goal coming here was to make the cut and I thought, ‘okay, we’ll be here for four days in Parksville and it’s not such a bad place for a little holiday.’ It turned out to be a lot more than that.”

Thoroughgood has only been playing golf for four years. He entered the junior program at Royal Colwood Golf Club as an 11-year-old and quickly became passionate about the game. His Colwood friends say no one works harder at the game. He is also a straight A student who is about to enter Grade 11.

Some of his Colwood buddies made the trek north to watch the final round and dumped a bucket of ice water on him after he sealed the win on the 18th green. “I am just surprised and happy I kept my nerves together,” he said. “I was playing with a guy who goes to Washington State (Anderson) and another guy (Chris Crisologo) who is going to Simon Fraser. Both are big names and I don’t think anyone has heard of me until now. They have a lot more experience than I do and I was surprised I was able to pull through.”

Ewart recovered from a disastrous start to finish second at five-under par. He shot the day’s best round — a five-under 67 — despite triple-bogeying the first hole. Ewart has now finished second this year at the B.C. High School Championships, the B.C. Junior and the B.C. Amateur. “I got off a bad start, but I just got to the second tee and forgot about it,” Ewart said. “I was like, just play your game, get it back to under par and I’ll be happy. And I did that.”

Anderson, a 20-year-old who is about to enter his third year at Washington State, managed to close to within a shot of Thoroughgood early in the round. He said he was done in by his short game. Anderson finished solo third at four-under par after shooting a two-over 74 on Friday. “I would miss a green, have a real easy chip and not get it up and down,” Anderson said.

“I had a couple of three-putts. On 17, I had a pretty easy chip, but it just landed on the collar and took off. Nothing dropped for me again today. If I had putted the way I did the first two rounds I am sure I would have been a lot better.”

But Anderson said Thoroughgood deserves full credit for the way he played on Friday. “He held it together really well,” Anderson said. “Solid kid. It will be interesting to see how he will do in the future.”

Thoroughgood drew laughter in his remarks at the closing ceremony when he thanked his father. “I want to thank my Dad for driving me,” he said, “because I couldn’t.”

Thoroughgood got more than the championship trophy after his win. Donna Dutton, who owns the course with her husband Bill, made a trip into Qualicum Beach to buy some ice cream so she could make Thoroughgood a celebratory chocolate milk shake.