Thompson takes 2 shot lead to final round of ANA Inspiration 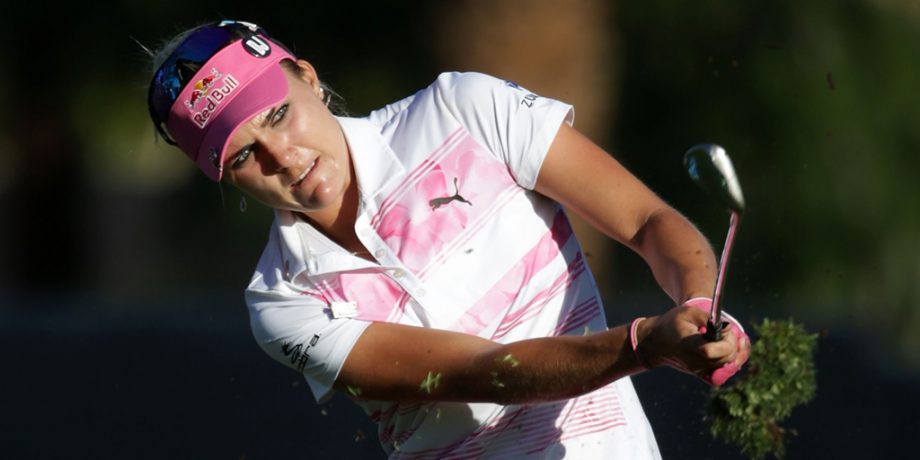 RANCHO MIRAGE, Calif. – One day after Lexi Thompson couldn’t even tee off until shortly before sunset, she had to get back to the Dinah Shore Course before dawn to start a 28-hole day.

Thompson is excelling under unusual conditions at the ANA Inspiration, and it has put her in prime position to play for her second major title.

Thompson claimed the tournament lead while completing her wind-delayed second round Saturday before moving two shots ahead of Norway’s Suzann Pettersen with a third-round 67 . After an extra-long day of play in wind and sun, Thompson is at 13-under 203 heading into Sunday’s final round.

“I struggled a little bit off the tee and had a few more rough shots than I wanted, but you can’t ever complain about a 5-under round,” Thompson said.

The 22-year-old Thompson’s victory here in 2014 is her only previous major victory, but the U.S. Olympian simply excels at Mission Hills Country Club. She smashed her drives and got great results from her inconsistent putter on the way to six birdies in the third round, keeping a competitive field squarely behind her.

“I just love this golf course,” Thompson said. “I get to hit a lot of drivers, and it just sets up nicely for me all over.”

Brooke Henderson of Smiths Falls, Ont., shot a 3-under 69 to get to 1-under for the tournament.

Thompson and Pettersen stayed ahead of a field posting unusually low scores, with the 2-over 146 cut matching the lowest cut score in tournament history.

They did it despite intermittent returns of the desert wind that called an early halt to Thursday’s play and forced two days of catch-up, forcing 56 golfers to complete their second rounds on Saturday morning. The field got all caught up on a postcard-perfect desert Saturday, and warm weather is expected Sunday.

“It’s definitely not a usual week, what we’re used to, but it’s a major week,” Thompson said. “We have to deal with the wind conditions and whatever weather we get.”

Pettersen shot a third-round 68 to reach 11 under, while Australia’s Minjee Lee joined a South Korean trio – Inbee Park, So Yeon Ryu and Mi Jung Hur – at 10-under 206. Michelle Wie, Cristie Kerr, world No. 2 Ariya Jutanugarn and France’s Karine Icher are five shots behind Thompson at 8 under.

“I think I’ve always said since the first time I saw this place, it really fits my eye,” said Pettersen, a two-time major champion.

“I’m driving the ball well, and that’s a major key on this golf course. I’ve got a big job to do (Sunday). The leaderboard is packed behind me as well. You’ve got to expect to go out there and shoot low. There’s a lot at stake, but I’m all in for it.”

Thompson debuted at the Dinah Shore Course as a 14-year-old amateur in 2009, and she won in 2014, the tournament’s final year as the Kraft Nabisco Championship. She has finished seventh and fifth in the two years since the major’s name change.

Thompson immediately took charge Saturday morning with back-to-back birdies, claiming the outright lead and surging to a second-round 67. After following two birdies with a bogey early in her third round, she settled in and finished the final 14 holes at 4 under.

Wie battled to a third-round 71 while struggling with a nagging back injury during her own 28-hole day. She repeatedly saved par to stay in contention.

“I just hit one shot that was a little bit out of sync and kind of threw my hips out of place,” Wie said. “I think it was just a lot of golf. The two full warmups (and then) 28 holes. Just not a young stallion anymore, I guess.”