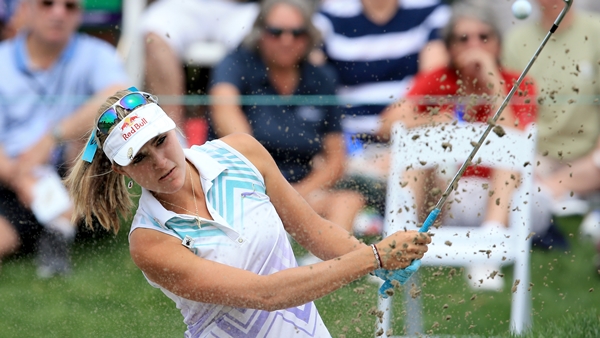 The 19-year-old Thompson, already a three-time winner on the LPGA Tour, shot a bogey-free 8-under 64 at Mission Hills for a share of the lead with Se Ri Pak.

“This is my favorite tournament of the year,” Thompson said. “It’s so beautiful, like really nice weather, and the fans are amazing.”

“I just had a little bit of speed issues yesterday,” Thompson said. “I didn’t really commit to my lines and I came up short a lot. I just went out today and picked my line and sped up my tempo a little bit and went up to it and said, `I’m going to knock it in.'”

Pak birdied the final hole for a 70 to match Thompson at 7-under 137 in the first major championship of the year. The 36-year-old South Korean player won the last of her five major titles in 2006 and has 25 LPGA Tour victories.

“Everything has just been really solid,” Pak said. “I kept it fairways, greens, always the goal every hole. I had a lot of opportunities, but putting is not as good as yesterday. Still, just really smooth, solid round. I’m really happy about the way I finished.”

Michelle Wie was a stroke back after a 71.

“I’m really excited,” Wie said. “It’s fun being near the top of the leaderboard. But try not to look forward too much. It’s a long way `til Sunday.”

Thompson birdied eight of the last 13 holes after opening with five pars.

“I was just trying to stay in the moment and focus on each shot, not really think about what I was shooting,” Thompson said. “I had the same confidence over every shot, just committing to my line and just being confident.”

She made a 20-foot birdie putt from the fringe on the par-3 17th – her eighth hole – and two-putted for birdie after reaching the par-5 18th in two.

“I’m really comfortable with the golf course,” Thompson said. “I get to hit a lot of drivers, so I just aim up the right side and hit my little draw.”

Wie opened with a 10-foot birdie putt on the par-4 10th, and dropped a stroke on the par 13th after driving behind a tree in the right rough. She had a three-putt par on 18 – missing a 3-footer – after reaching the water-guarded green in two.

“It felt good to start off with a birdie,” Wie said. “After that, really just couldn’t get anything going. … But it felt good. Par is a good score out here.”

On the par-5 second, she made a 25-foot birdie putt after hitting a snap hook off the tee. Instead of going out of bounds, the ball hit a tree and ricocheted into the fairway.

“It was a pretty lucky shot,” Wie said. “I thought it was for sure OB.”

First-round leader Shanshan Feng bogeyed the final two holes for a 73 to drop into a tie for fourth with Cristie Kerr at 5 under. Kerr had a 70.

Thompson, Pak and Wie played in calm morning conditions, while the breeze picked up as Feng and Kerr finished their afternoon rounds on the overcast day.

“The wind kind of picked up, so it was actually tougher playing compared to yesterday,” Feng said. “I think I actually did pretty well. I did make two bogeys coming in, but I was still concentrating, and it just happens. Sometimes you make good strokes and they don’t fall on this course. I’m still positive.”

Anna Nordqvist, the winner in Thailand in February and Carlsbad last week, was tied for sixth at 4 under after a 69. Playing partner Stacy Lewis, the 2011 champion, had a 70 to join 16-year-old Lydia Ko and Hall of Famer Karrie Webb at 1 under. Ko and Webb, a two-time winner this year, also shot 70.

Defending champion Inbee Park was even par after a 70.

Team Canada’s Brooke Henderson carded a 4-under 68 to climb 46 spots up the leaderboard into a tie for 36th at 1 over par. The 16-year-old Smiths Falls, Ont. native had just one blemish on her second-round scorecard – a bogey on the par 4 16th.