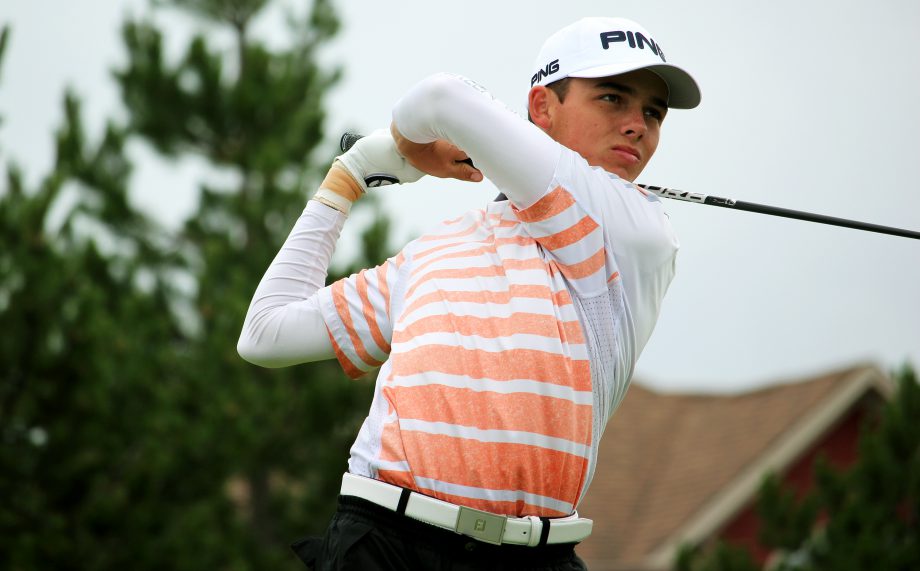 JOHN’S, N.L. – Early morning clouds separated and beams of sunshine broke through in much the same way that third-round action unfolded at the Canadian Junior Boys Championship. Thomas Critch, who began the day with a share of 7th, carded a 5-under 67 to sit atop the leaderboard at Clovelly.

Critch – a dual citizen who resides in Cedar Park, Texas – collected seven birdies on the day, including five across a bogey-free back nine, highlighted by a 45-foot putt on No. 14. He would go on to birdie his final two holes to claim sole possession of the lead at 5-under 211.

“I had it going at the beginning,” recounted the 16-year-old. “I was 2-under through four and then I had a couple of slip-ups on six and eight. I made a really good par putt on hole nine that got me going. I just had it going on the back nine. I was putting really well.”

The University of Arkansas commit garnered a strong following throughout the day that was more than eager to lend their support to a hometown boy.

“My grandpa used to be a member here [at Clovelly]. I used to come here every summer and play a couple of rounds. So playing in this and knowing that my whole family is going to be out here watching is really special to me.”

“When I found out the tournament was going to be in St. John’s, I really wanted to play in it very badly,” Critch added. “Just to be in the hunt to win is really cool and if I can win, that’d be great. I bet my family would be really proud of me.”

Heading into the final round, Critch stressed the need for focus and self-confidence.

Trailing Critch in both the Junior and Juvenile divisions is Duncan, B.C., native Callum Davison. The 2016 CN Future Links Quebec champion carded a 72 with a trio of birdies on the day to sit two strokes off the lead. 18-hole leader Sam Meek of Peterborough, Ont., and 36-hole leader Brendan MacDougall from Calgary hold shares of third at 2-under. Fellow Calgarian Max Murchison is two shots back of Davison in the 16-and-under Juvenile division.

Alberta claimed the inter-provincial team title which was played concurrently over the championship’s first two rounds. The trio of Calgary’s Brendan MacDougall, Chandler McDowell of Springbrook and Matt Bean from Canmore finished 2-under 286 for a nine-stroke victory.

In addition to the title of Canadian Junior Boys champion, the winner will receive an exemption into the 2016 Canadian Men’s Amateur Championship to be co-hosted by The Royal Ottawa Golf Club and Eagle Creek Golf Club from August 8 to 11.

The third day of competition will begin with groups teeing off Nos. 1 and 10 at 7:30 a.m. NST. Additional information from the tournament can be found here.