Thomas Bjorn comes from behind to win Nedbank Challenge 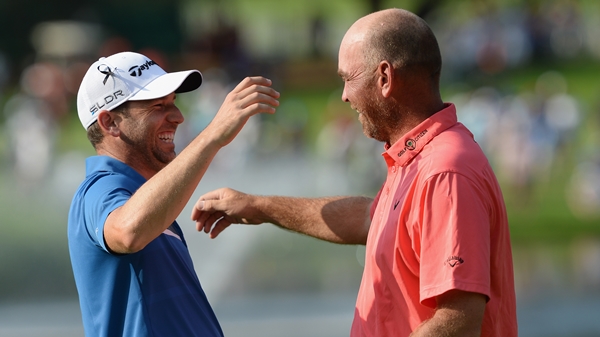 SUN CITY, South Africa – Thomas Bjorn carved out two eagles in his last nine holes, one brilliant and one a little lucky, to come from behind and win the Nedbank Golf Challenge on Sunday, closing with a 65 for 20-under overall and a two-shot victory.

Overnight leader Jamie Donaldson of Wales wasted a three-shot advantage with a final-round 70 and tied for second with Sergio Garcia (65).

Bjorn’s sweet five iron into No. 10 set up the first eagle to push him past Donaldson. The Dane had his second on No. 14 after his approach pitched in a bunker and rolled up onto the green.

“They were two big moments,” Bjorn said. “Obviously having two eagles on the back nine on a Sunday doesn’t happen very often. The shot into 14 was a bit fortunate but that’s what happens when you win golf tournaments, I guess.”

The $1.25 million winner’s check at Sun City is the 42-year-old Bjorn’s biggest prize and it’s his 15th European Tour title.

Donaldson was bidding to become the first debut winner at Sun City since Zimbabwe’s Mark McNulty in 1986 but bogeyed No. 9, and couldn’t find any more birdies until No. 17. Garcia’s challenge slipped away with a dropped shot on No. 16 after a run of four straight birdies at the end of his front nine, allowing Bjorn to bogey the last at Gary Player Country Club and still win.

Bjorn’s triumph was hailed by fans in the galleries on No. 18 waving streams of South African flags in late afternoon sunshine on a day dedicated in the country to prayer and reflection following the death of former President Nelson Mandela. The tournament stood for a rendition of the South African anthem at the end.

“I think to the whole world he was just an inspiration to human beings. He was a great man,” Bjorn said of Mandela at the trophy presentation. “To see what one man can do, it’s an inspiration to all of us. If we all just did a bit more, this world would be a better place.”

FedEx Cup and European money list winner Henrik Stenson was fourth on 6 under after his 67 in the No. 3-ranked Swede’s first tournament back since ending last season as the world’s best-performing player.

Brendon de Jonge (66) was fifth on 15 under and Charl Schwartzel (66) sixth on 13 under, the highest placed South African. Ryan Moore of the United States, another Sun City rookie, was in contention through three rounds before a 73 on Sunday took him back to a tie for seventh with U.S. Open champion Justin Rose.

Home favourite and three-time champion Ernie Els had to deal with news of Mandela’s passing on Thursday and the death of his former psychological coach on Saturday, and ended with a second straight 77 to finish 12 over par and second from last in the expanded 30-man field.

This is the first year the Nedbank has been part of the European Tour’s schedule.