The future is now for Brooke Henderson 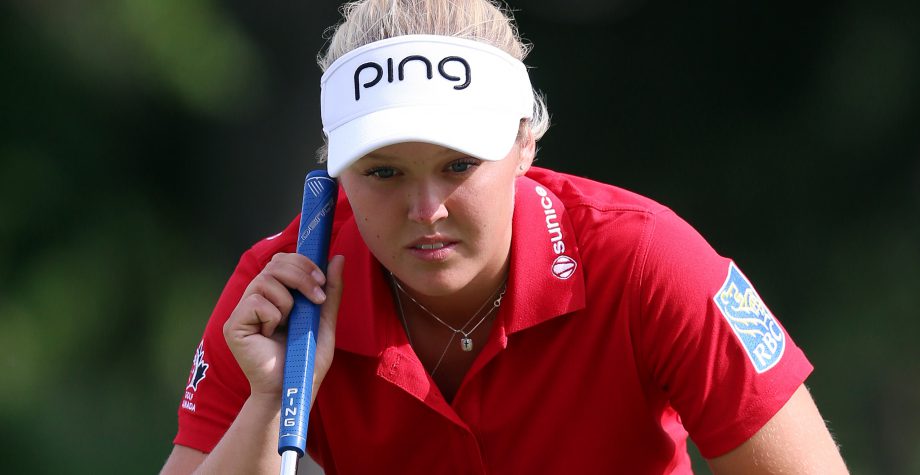 Brooke Henderson’s solid results on the golf course recently not only has provided a solid indication of a bright future ahead for the 17-year-old from Smith Falls, Ont. but has also generated huge excitement, with many now taking notice of her game.

Her breakthrough performance came at the 2015 Swinging Skirts LPGA Classic in April when the youngest member of Golf Canada’s Young Pro Program set a new 36-hole record; and held the outright lead heading into the final round.

The following weekend, at the Volunteers of America North Texas Shootout, Henderson once again found herself on top of the leader board after shooting a second round 6-under 65.

Henderson – who is currently in her first full season as a pro – has not only caught the attention of fans and those in the media, but also the attention of the game’s biggest star, Lydia Ko.

“She’s obviously playing great; really solid. I got to play with her recently at the Kingsmill Championship and she’s a really strong player mentally,” said the current world No. 1 at the Manulife Financial LPGA Classic about Henderson.

“I’m sure she’s going to keep shooting low scores and it’ll be great to have her as a full-time member soon,” added the 18-year-old New Zealander, who is a seven-time winner on the LPGA Tour.

Despite coming up short in her efforts to win an LPGA tournament thus far, Henderson says her stellar results have done a lot for her confidence.

“It was awesome and definitely a huge confidence booster leading two weeks in a row on the weekend which was really exciting,” said the former world No. 1 amateur.

“The experience taught me a lot about myself, and my game and also about competing on the LPGA; and it’s something I can continue to use in each tournament,” added the 17-year-old Canadian.

Currently as a player without status on the LPGA Tour, Henderson’s entry into additional LPGA events requires her to either successfully go through a pre-tournament qualifier or be granted a sponsor exemption.

Just this week, it was announced that she has been offered a sponsor exemption into the KPMG Women’s PGA Championship, which is the LPGA’s second major on the 2015 schedule.

However, one event that the talented young golfer from Smith Falls, Ont. has guaranteed herself entry into is the U.S. Women’s Open – which will be held in Lancaster, Pennsylvania in July.

“I’m excited about it; I didn’t have to go through the 36-hole qualifier which is always nice and it’s pretty close to home; so I’m hoping that a lot of family and friends will be able to make it out,” said Henderson, who finished runner-up at the 2014 U.S. Women’s Amateur Championship and earned entry into this year’s event U.S. Women’s Open as a result.

The week following the LPGA’s third major, she will be representing Canada at the Pan Am Games along with four-time LPGA Tour winner, Lori Kane.

“It’s an honour to play for my country,” said Henderson. “And it’ll be fun; Lori is a great player and I think we’ll have a lot of bonding timing which is always good with such a legendary player with such great experience.”

Another successful Canadian LPGA veteran that Henderson has bonded with and gained valuable insight from is Alena Sharp.

“I like it that she asks me for advice. I just tell her things that she needs to know and I’m happy that she’s not afraid to talk to me,” said the 34-year-old from Hamilton, Ont. when asked for her input on Henderson’s progress and maturity as a golfer.

“I think she’s got all the talent and she’s just a nice girl. She’s really humble and we’re becoming good friends, which is cool,” Sharp added.

With strong and highly capable mentors willing and eager to provide guidance on her journey towards success, the future appears to be very bright for the talented young golfer from Smith Falls, Ont.

And while the talented young golfer lists gaining her full LPGA Tour card and earning a spot on the 2016 Canadian Olympic team as her two top goals over the next year, Henderson also understands the future is now.

The mature 17-year-old says that the best way to reach her longer term goals is simply to continue taking care of business in the busy summer ahead.

“I try not to look too far ahead but just trying to take it week by week; I’ve had great weeks out there recently, and in my mind, I know my game is right there,” said Henderson.

“I just have to stay patient,” she added. “Because I know great finishes and a win will come soon.”