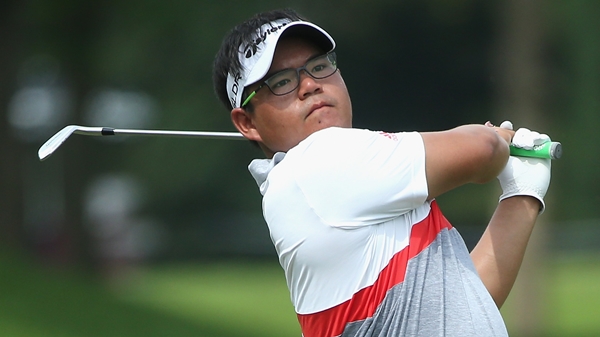 SINGAPORE – Panuphol Pittayarat of Thailand made nine birdies in a blemish-free round of 9-under 63 to take the first-round lead at The Championship at Laguna National on Thursday.

Panuphol, ranked just 451st in the world, was a stroke ahead of a group of four golfers in second – Scott Jamieson, David Lipsky, Kim Byung-jun and local favorite Quincy Quek.

The tournament, a co-sanctioned European and Asian tour event formerly called the Ballantine’s Championship, was moved from South Korea to Singapore just three weeks ago after it lost its title sponsor and the promoter failed to reach an agreement with a suitable golf venue.

Defending champion Brett Rumford of Australia was in joint-64th place after a 70, level with France’s Alexander Levy, who won his maiden European Tour title Sunday at the China Open.

The 21-year-old Panuphol earned his best European Tour result late last year when he finished tied for 18th at the Hong Kong Open. But he’s missed his last three cuts on the Asian Tour.

“I didn’t see it coming but it did come,” he said of his 63 on Thursday. “I’m feeling good about my game right now. I was just trying to hit straight out there. I managed to hole a lot of putts and a lot of them were unexpected.”

Jamieson, who won his first European Tour title last year at the Nelson Mandela Championship in South Africa, also had nine birdies in his round, including a difficult chip shot from the bunker on the par-3 No. 17, his eighth hole. He had one bogey on the par-4 16th.

“I’ve been hitting the ball well the last couple of weeks, so it was nice to get a round where it all came together,” he said. “There was just the one mistake with the three-putt on 16, but it was pretty far away and pace putting is always difficult in Asia with the grain. It’s not what someone from Scotland is used to.”

Panuphol’s countryman, Arnond Vongvanij, was in a share of the lead at 9 under until taking a double bogey on No. 8, his 17th hole, to fall back to a share of sixth place on 65.

Spain’s Rafa Cabrera-Bello, who has three top-10 finishes this year, was another shot back in a group at 6 under.

Canada’s Richard T. Lee shot a 1-under 71 and was tied for 81st when play was suspended due to darkness at 7:30pm local time.