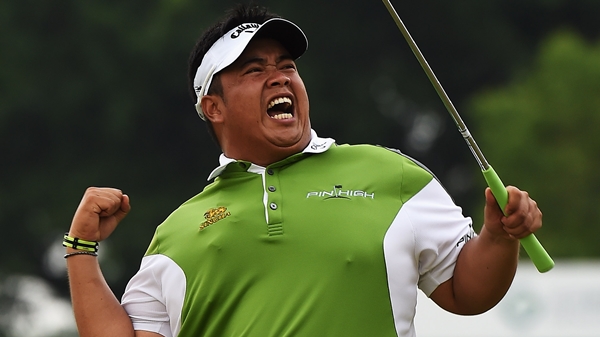 SHENZHEN, China – Thailand’s Kiradech Aphibarnrat captured the inaugural Shenzhen International on Sunday after rallying in regulation with an eagle on the 17th hole and beating Chinese teenager Li Haotong in a playoff.

Kiradech and Li shared the lead after the turn, but the 19-year-old Chinese player looked to be heading for the biggest title of his career when he birdied the 17th and Kiradech bogeyed the par-4 15th to open up a two-stroke lead.

Kiradech rebounded, however, with an eagle on the par-5 17th to pull even with Li again and force the playoff. He had a chance to win on the 18th, but his birdie putt skirted to the right of the hole.

On the playoff hole, Kiradech hit his approach shot to the middle of the 18th green and made a birdie, while Li two-putted for par.

Kiradech said he couldn’t have pulled through without the encouragement if his caddie.

“When we were two behind on the last two holes, he said you have not lost, we have not signed the scorecard yet and he was completely right and I just got the job done,” he said.

Kiradech had only won one previous title on the European Tour at the 2013 Malaysian Open. He was coming off a joint-sixth place finish at the Arnold Palmer Invitational last month on the U.S. PGA Tour.

Li has been improving over the past year. He won the last two tournaments on the PGA Tour of China last year to earn a card on the U.S.-based Web.com Tour, where he has made five cuts this year. He’s also risen to No. 194 in the world rankings – surpassing established players Liang Wenchong and Wu Ashun to become the highest-ranked Chinese player.

Fleetwood played steady all week, carding 70, 69, 69 and 69 in his four rounds. The 24-year-old Englishman, who had been aiming for his second European Tour title, pulled within a stroke of Li with a birdie on the 17th, but could get no closer.

France’s Julien Quesne also had an eagle on the 17th and a birdie on the 18th to shoot a 65.

Two-time Masters champion Bubba Watson finally seemed to acclimate to the conditions after three subpar rounds, making eight birdies to shoot a 7-under 65. It was the first time he’d broken 70 this week.

“I wish I would have putted better the first three rounds,” he said. “I putted good the last round, but all in all, it was a good test. It shows what I need to work on. It shows me that I can play outside the U.S., especially today.”