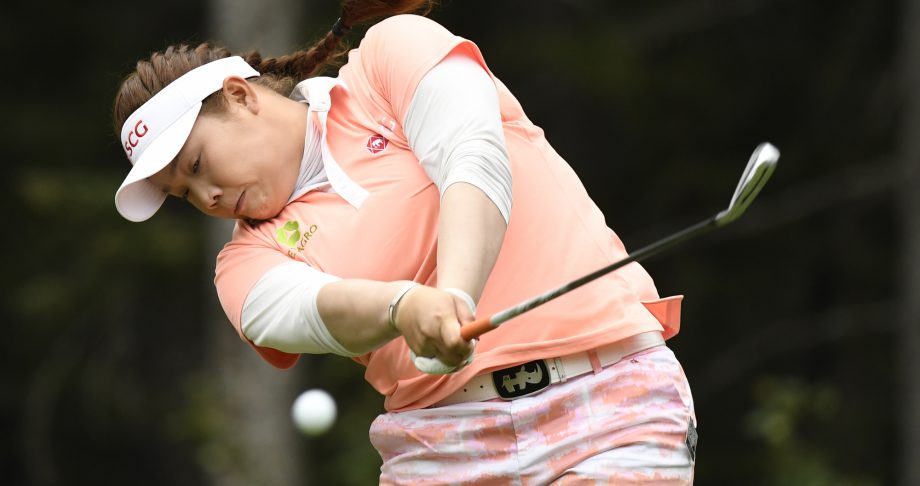 CALGARY – Ariya Jutanugarn wasn’t going to let two bogeys in her final three holes get her down.

The 20-year-old from Thailand still shot a solid round of 65 on Saturday to remain atop the leaderboard through three rounds of play at the CP Women’s Open.

“I’m feeling good,” said Jutanugarn, who sat alone in first place at 17 under, two shots clear of South Korea’s In Gee Chun. “I know I had two bogeys in the last three holes, but I still shot 5 under, so I feel good.”

Chun, who started the day three shots behind Jutanugarn, had three birdies on the front nine and three more on the back nine during her bogey-free round of 66 on the par-72, 6,622-yard Raven course layout at the Priddis Greens Golf and Country Club.

“I keep my eye on me,” said Jutanugarn when asked if Sunday’s final round will turn into a two-person race between her and Chun. “Tomorrow I really want to have fun and I really want to be happy on the course, that’s all I want tomorrow.”

Jutanugarn is currently No. 2 in the women’s world golf rankings behind New Zealand’s Lydia Ko and just ahead of Brooke Henderson of Smiths Falls, Ont.

In just her second year on the LPGA tour, she’s already won four times, including a stretch of three tournament victories in a row in May.

“After I won my first tournament, I kind of know how I play under pressure, so I know when I get really excited what I have to do,” she said.

South Korea’s Sei Young Kim carded a round of 68 to pull into a tie for third at 12 under with Northern Ireland’s Stephanie Meadow, who shot 69.

“I started off great and then kind of had a little lull in the middle, but I hung in there,” said Meadow. “That’s what golf if about. You just keep fighting and hope for the best score at the end.”

Hamilton’s Alena Sharp bounced back from bogeying the second hole with six birdies to shoot a solid round of 67.

“It started off kind of ugly,” said Sharp, who moved into a five-way tie for fifth place with Sweden’s Anna Nordqvist along with Ha Na Jang, Amy Yang and Chella Choi, all from South Korea.

“I was not hitting it well the first nine holes, but I hung in there. I think that’s something that’s gotten better with my game is when it’s not good, I realize, ‘OK, just keep grinding away, it’s going to change,’ and the last six holes were great.”

Henderson shot her second straight round of 4-under 68 to move into a six-way tie for 21st spot at 8 under along with fellow Canadian Maude-Aimee Leblanc, of Sherbrooke, Que.

“I felt way better today and I think feeling the energy from my massive crowds has definitely really helped that,” said Henderson. “Through bad shots and good shots, they’re supporting me and give me a little bit of extra energy and positive vibes. That’s really helped me the last two days.”

Nine shots off the lead, Henderson said she’s just going to try to shoot as low as she can on Sunday to see how far she can climb up the leaderboard.

“I’m hoping to get a top 10,” she said. “Hopefully I’ll get a little bit deeper under par tomorrow and see what happens.”

Calgary’s Jaclyn Lee fell back into a tie for 47th spot at 4 under after shooting 1 over.

“I feel like I was a little slow today, made some good birdies and then made a big number,” said Lee, who’s playing in her first LPGA event as an amateur. “To finish on 18 today and hear the crowd cheer for me, it’s awesome. You have no idea how much support you have until you’re really here and you hear it.”

Quebec City’s Anne-Catherine Tanguay shot 74 and is 1 over for the tournament heading into Sunday’s final round.