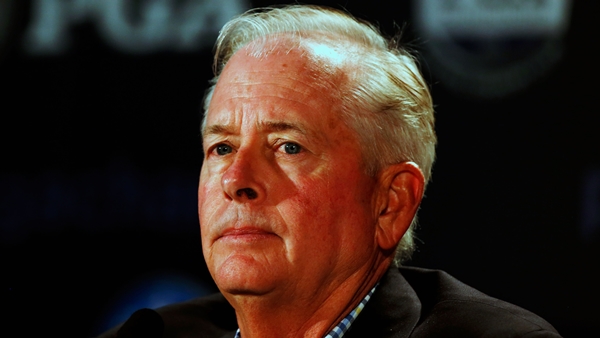 ST. SIMONS ISLAND, Ga. – Ted Bishop was never afraid to take a risk or share his strong opinions on any subject during his 23 months as president of the PGA of America. Ultimately, that wound up costing him his job.

Bishop became the first PGA president to be removed from office, and he went down swinging.

He said the PGA officers asked him to resign Friday morning over his sexist comments on social media directed at Ian Poulter. Bishop refused, wanting to apologize in person to the PGA board of directors and let the process run its course. It turned out to be a short trip.

“The board heard me out and then voted to impeach me,” Bishop said. “That is the due process and I respect that, as painful as it might be.”

Bishop was irritated by remarks Poulter made in his book on the Ryder Cup captaincy of Nick Faldo in 2008 and Tom Watson this year. He referred to Poulter as “Lil Girl” on Twitter when stacking up Poulter’s feats next to Faldo. In a Facebook post, he noted that Watson (with eight majors) and Faldo (with six majors and the Ryder Cup record for most points) were getting “bashed” by Poulter.

The board voted to remove him, and the punishment was severe.

Along with losing his job, Bishop lost privileges afforded all past presidents, such as honorary roles at future PGA Championships and Ryder Cups. Bishop had only 29 days left on his two-year term before the next election at the PGA annual meeting in Indianapolis, not far from the Legends Golf Club in Franklin, Indiana, where he works.

“Today, all I have left is my PGA membership and that will always mean the world to me,” Bishop said.

In decided to oust Bishop, the board said the remarks were inconsistent with the association’s policies.

“The PGA of America understands the enormous responsibility it has to lead this great game and to enrich lives in our society through golf,” PGA chief executive Pete Bevacqua said in a statement. “We must demand of ourselves that we make golf both welcoming and inclusive to all who want to experience it, and everyone at the PGA of America must lead by example.”

The PGA of America has 27,000 members, about 1,100 of them women. Bevacqua said in a telephone interview that he received “a lot of negative feedback from all types of sources, internal and external.” He declined to specify whether PGA female members were part of that.

Bishop apologized to Poulter and “anyone else I might have offended.”

“This is a classic example of poor use of social media on my part and if I had the chance to hit the delete button on the things that I sent out yesterday, I would without hesitation,” Bishop said. “The PGA of America asked me to avoid any interaction with the media in the past 24 hours and that is why I did not issue a formal and public apology, which I have wanted to do since early this morning.”

Derek Sprague, expected to be voted in as the next president at the Nov. 22 annual meeting, was appointed the interim president. Paul Levy will handle the roles as vice president and secretary until the election.

Suzy Whaley, a teaching pro from Connecticut who qualified to play a PGA Tour event in the Hartford area in 2003, is among three PGA members running for secretary at the Nov. 22 election. If she wins, Whaley would be in line to be PGA president in 2018.

Whaley said she found Bishop’s remarks to be “insulting.”

“I was extremely disappointed and they were definitely sexist,” Whaley said in a telephone interview. “I’m of 100 percent belief that we need to empower young girls.” Asked if she complained to the PGA officers, Whaley said, “I didn’t have to do that.

“The PGA of America took incredibly swift action and are taking this extremely serious. Obviously, it’s critical that we are inclusive.”

Poulter was on a plane to China when Bishop posted his remarks Thursday and wasn’t aware of them until he landed and found his phone filled with messages.

“Is being called a `lil girl’ meant to be derogatory or a put down?” Poulter said. “That’s pretty shocking and disappointing, especially coming from the leader of the PGA of America.”

Bishop’s boldest move was to pick Watson as the U.S. captain, saying he was tired of the Americans losing. But the move backfired when Watson’s heavy-handed style didn’t mesh with a younger generation. Watson, 65, was the oldest captain in Ryder Cup history.

Poulter in his book said that Watson’s decision-making “completely baffles me.” He was referring to Phil Mickelson and Keegan Bradley being benched for both sessions Saturday. He also was critical of Faldo for his commentary on Golf Channel during the Ryder Cup that Sergio Garcia was “useless” in 2008. Faldo was captain of the only European team to lose in the last 15 years, and Poulter wrote, “So who’s useless? I think Faldo might need to have a little look in the mirror.”

Davis Love III described Bishop as a friend and a “great supporter of golf” and said he would not remember his presidency for this incident. Among other things, the PGA joined up with the LPGA Tour to help pay for its oldest major. The Women’s PGA Championship will be sponsored by KPMG, which will use the week to host a major conference for women executives.

“I have said things in my passion for the Ryder Cup that I wish came out differently,” Love said. “We all make mistakes on social media.”