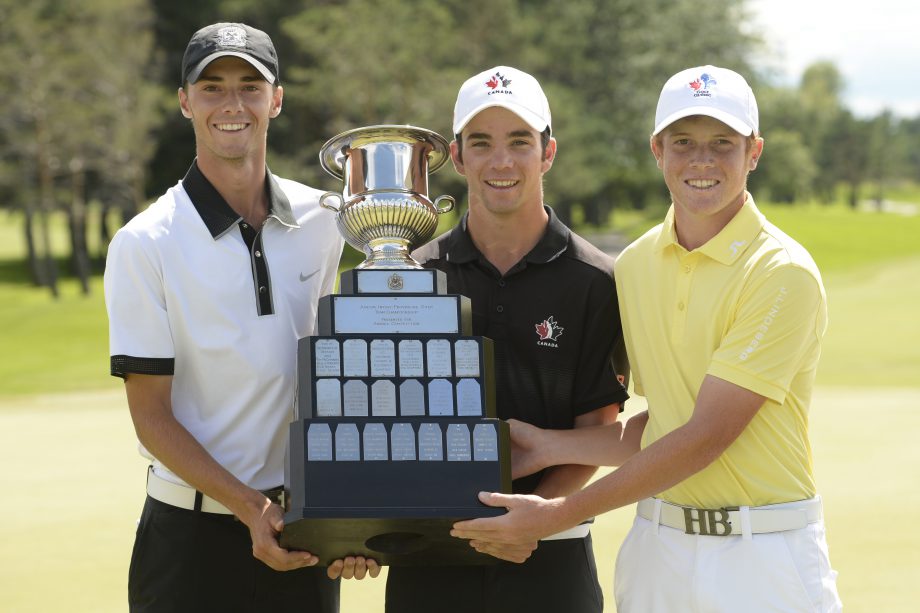 VAUDREUIL-DORION, Que. – Team Quebec captured the inter-provincial team championship on home soil at Summerlea Golf & Country Club in Vaudreuil-Dorion, Que. The competition comprised of three-person teams is conducted in conjunction with the first 36-holes of the Canadian Junior Boys Championship.

With a combined score of 288, Team Quebec was led by the strong second-round play of Raphaël Lapierre-Messier who posted a 3-under round of 69. Lapierre-Messier co-leads the Junior division at 1-under 143.

The St-Jean-Sur-Richelieu, Que., native was joined on Team Quebec by Étienne Papineau, a native of the same hometown. Papineau, a member of Team Canada’s Development Squad, posted a second-round 1-under 71 to sit T4. The final member of Team Quebec, Félix Normand of Beloeil, Que., signed for a score of 78.

Lapierre-Messier recorded a total of five birdies en route to the tournament’s only score in the 60s through the second round.

“I started off my front nine really solid and I played good golf, it was nothing extraordinary, but it was solid,” explained the 18-year-old. “On the back nine, I struggled a little, but my putter saved me. I did miss some putts, but I made a lot to make up for it. It was a good day.”

Joining him at the top of the leaderboard is Maxwell Sear of Unionville, Ont. The 2015 Ontario Junior Boys Spring Classic champion climbed up the standings with five birdies today after an opening round of 73.

In third place at one stroke back is Whitby, Ont., product Kevin Gordon who posted a round of 1-over 73 with back-to-back birdies on holes 11 and 12.

Team Ontario finished runner-up in the inter-provincial competition with a total of 296. Ontarians Kyle Johnston of Shelburne and Sam Meek of Peterborough carded rounds of 1-under to account for their team’s score. In third place was defending champion Team Alberta with a combined total of 302. The team’s second round tally was comprised of Camrose, Alta., native Andrew Harrison’s 3-over 75 and Calgary product Alexander Smith’s 78.

In total, 73 players who shot 13-over 157 or better made the 36-hole cut and will advance to the final two rounds.

In the Juvenile division, opening-round co-leader Charles-Éric Bélanger of Québec City, Que., moved into solo first at 146 following a 3-over 75 second round. A.J. Ewart of Coquitlam, B.C., is one stroke back in second place while Jack Simpson of Aurora, Ont., rounds out the top three players aged 16-and-under.

The third round of the 2015 Canadian Junior Boys Championship will begin tomorrow at 7:30 a.m. EDT.