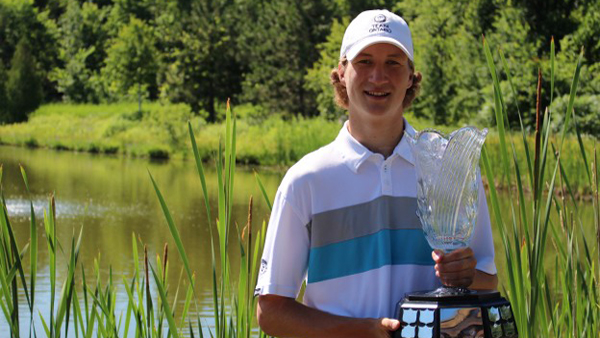 Ranton was ranked fifth heading into the match, while Dobbs held the No. 3 seed in the tournament. Ranton was dominant. In the semifinals he earned a 7&6 win over Niagara Falls’ Jaret Chipman. In the quarter finals, Ranton was victorious 3&1 over Toronto’s Minwoo Park. Ranton’s quest to the title also went through Selwyn’s Mitchell Holden (5&4), Toronto’s Will Gavarkovs (5&3), and Shelburne’s Kyle Johnston (7&5).

After the win, Ranton talked about his successful week at the tournament.

“I started the week playing really well,” said Ranton. “Through the middle three matches I faltered a little bit, but was still able to win the second and third matches pretty easily. Then in the quarter-final match, I was two-down thru 11 and then found my game and managed to win. The semi-final match was my best of the week. I started with a bogey, but then followed it up with five birdies on the next 11 holes.”

It was the big win in his semi-final match that helped give Ranton the push he needed heading into the finals.

“I got a lot of confidence and momentum after that and wanted to keep it going,” he added. “I started really well in the finals. I started with a birdie and really got back in the grove I was in the day before.”

Ranton says there were points in the final match where he felt he was able to take control.

“He (Dobbs) made a couple of mistakes early and I kept playing steadily. I thought I was doing pretty well and then he made a birdie on 11 and put it really close on 12, so I kind of faltered there. But I got up and down to halve 12 and then birdied 13 and that’s when I thought I probably had it.”