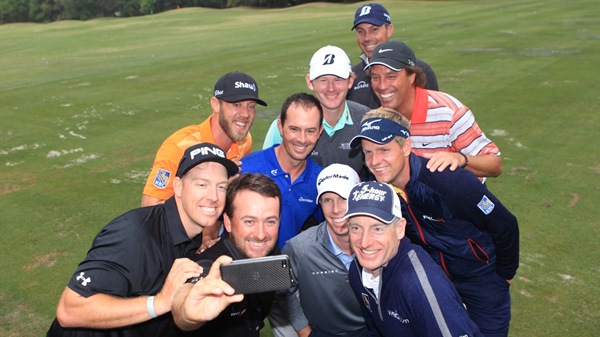 If you don’t think golf is a team sport, think again.

Eleven players in the field for the RBC Canadian Open at the Royal Montreal Golf Club will be sporting the distinctive blue, gold and white shield logo as members of Team RBC.

“The 11 are among the best professional golfers today and are fantastically important for the RBC brand,” said Jane Broderick, chief brand and communications officer for RBC. “Team RBC golfers are chosen because their values and what they stand for is totally aligned with the RBC brand.

“The three elements are integrity, trust and responsibility. Those are things that we stand for,” said Broderick. “Having those brand attributes ourselves and their brand attributes so aligned is wonderful.

“These are roles models,” she added. “We all know that these are the good guys in golf. The fans love them and they do things on and off the course that are really differentiated.”

Team RBC is actually 12 members strong with the inclusion of LPGA Tour veteran Morgan Pressel of the United States. As members they showcase the RBC logo on their golf bags and clothing and are featured in company marketing and advertising campaigns in Canada, the U.S. and international markets.

Team RBC is a major component in the bank’s commitment to golf as the title sponsor of the RBC Canadian Open as well as the RBC Heritage, held annually at Harbour Town Golf Links on Hilton Head Island, S.C.

“The concept began as a complement to our golf portfolio back in 2008. We determined that they could provide us with some additional brand exposure,” said Broderick. “We started with three brand ambassadors (Weir, Ames and American Anthony Kim) and between 2008 and today we now have our current roster of 12.

“Our unique aspect for Team RBC is their commitment to philanthropy and community,” said Broderick. “I can’t speak to other organizations, but I can tell you that within RBC they have been really great in building our brand. We show them in our advertising campaign and as the cornerstone of our Make Your Mark campaign, so again…perfectly aligned.

“We’re really proud about that and proud of the work they do with the charities that they support.”

Broderick cited Snedeker’s commitment and involvement with Dustin Barr, a young cancer patient from Toronto, while Snedeker was enroute to winning the 2013 RBC Canadian Open at Glen Abbey in Oakville, Ont.

“These are things that these guys do. It’s built into their values. It’s in their DNA. They think, act and behave like RBCers,” said Broderick. “They place great importance in their role and being active. They use this status to do that so we’re really pleased with them.”

What they do on the course is important as well in terms keeping the RBC brand in the spotlight.

They have a combined total of 72 career victories on the PGA Tour, including seven majors, of which four belong to Els.

Kuchar was the first member Team RBC to record a victory this season, winning at the RBC Heritage in March for his fifth career PGA Tour title. And while the team’s newest members DeLaet and Hearn have yet to win on tour, the fast rising Canadians have combined for seven top-10 finishes this season so far.