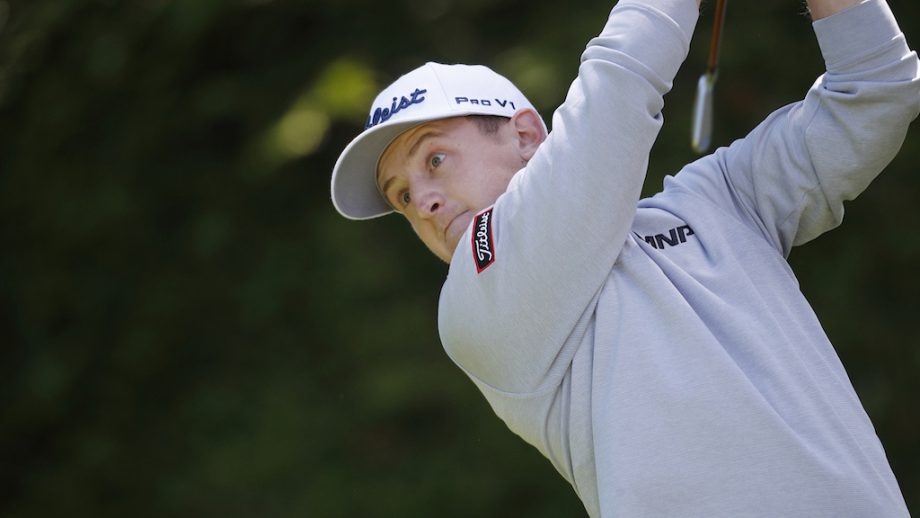 Kelowna, British Columbia, Canada— Among the 21 Canadians in the field, Jared du Toit from Kimberley, B.C.,
fired the lowest opening round, with a bogey-free, 6-under 65 and sits tied for sixth on Thursday after the opening round of the GolfBC Championship.

“It was the weirdest thing. I was playing a practice round and wasn’t playing great, and I was like, ‘Man, I don’t know how I shot 61 here, it’s kind of tough.’ But it is definitely good to have that 61 in the back of my mind.” said du Toit.

Mark Anguiano, Grady Brame, Jr. and Zach Wright carded matching rounds of 9-under 62 and are tied for the lead. They hold a two-shot lead heading into the second round.

Playing in the first group of the morning wave, Anguiano set the tone early with a bogey-free, 9- under 62. He carded nine birdies during his play at Gallagher’s Canyon Golf and Country Club, a round which included four consecutive birdies on Nos. 2-5. Anguiano came one shot shy of tying the tournament record, set last year by Canadian Jared du Toit in the third round.

Anguiano, who was fighting a left-knee injury last week at the Bayview Place DCBank Open presented by Times Colonist, almost withdrew before the final round in Victoria due to the pain. He went on to tie for 23rd in the event.

“I didn’t even warm up in the last round, and I was thinking of not even playing on the last day,”said Anguiano. “It was hurting that bad, but physically I feel better. It’s about 80 percent thisweek. I took good care of it.”

Joining Anguiano atop the leaderboard is Louisiana native Brame. He combined seven birdies with an eagle for a matching, bogey-free 9-under 62. His eagle on the par-5 ninth hole was the result of a stellar second shot from 205 yards. Using his 6-iron, the ball landed on the fringe and narrowly missed the hole, ending up 10 feet past the pin. He made the putt for eagle and closed the round with five additional birdies. Brame followed a tie-for-fourth finish at this year’s Q- School USA East No. 2 with two consecutive missed cuts in the first two events of this season.

Wright played his last four holes six-under par with an eagle-birdie-birdie-eagle finish. The 9- under 62 from the Louisiana State University alum consisted of two eagles, seven birdies and two bogeys. The 24-year-old started the season with a runner-up finish at the Freedom 55 Financial Open and entered this week No. 3 in the Order of Merit.