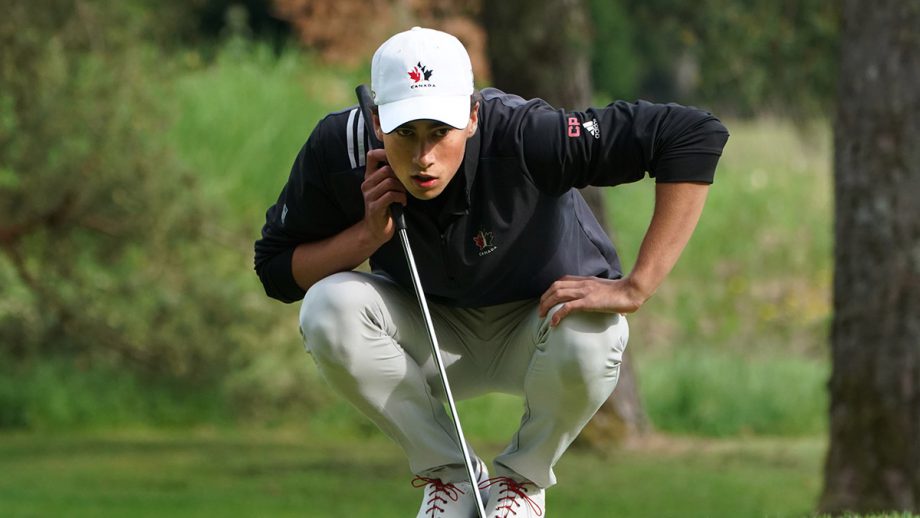 CALEDON, Ontario—Although cool and overcast all day, players at TPC Toronto at Osprey Valley’s Heathlands Course experienced very little wind, and the scores reflected that in the Canada Life Series’ season finale. Amateur Laurent Desmarchais fired an opening, 9-under 62 to take the lead, and five others were 65 or better during what turned out to be ideal scoring conditions in the first round. They include the 64 shooters Joey Savoie and Brendan Leonard and a trio at 65—amateur Jordan Crampton, Blair Bursey and Tanvir Kahlon.

Nobody, though, was better than Desmarchais on Wednesday. The member of Golf Canada’s Junior Boy’s Squad has played in all three previous Canada Life Series tournaments, making the cut each week. Desmarchais’ tie for 10th in the season-opener remains his best finish. His opening 68 that week was his best 18-hole score until he dismantled the Heathlands Course with his eight-birdie, one-eagle, one-bogey 62 in round one.

“Honestly, I just didn’t miss a shot out there. I started with an eagle and got some momentum there, and just kept hitting good shots and making putts,” the Longueuil, Quebec, native explained after his round. “After I turned in 29, I thought maybe there was a chance to shoot 59, but I bogeyed 11. After that, I just focused on hitting a few more good shots and bounced back with a birdie on the next hole.”

The birdie barrage slowed down after that, with his final birdie of the day coming at the par-5 16th. No other mistakes gave him the dream start to fourth and final Canada Life Series tournament.

“I want to win,” Desmarchais said matter-of-factly. “Every time I play in an event, I want to try and win, and so hopefully I can keep playing well and give myself a chance to win this week.” He certainly did.

Desmarchais will have to hold off a contingent of 17 players within four shots of the lead with 36 holes to play.

One eagle. Eight birdies. One bogey.

Three players still have a shot at winning the overall points title, with Cao (first) and Pistorius (second) both distancing themselves from No. 3 Evan Holmes, who could only muster an even-par 71. Holmes is tied for 65th and will have to turn things around Thursday to make the cut. Cao and Pistorius both shot 67s and are tied for 19th. For Cao, it was a case of what might have been. He was 8-under through 16 holes after a birdie on the par-5. Cao gave back half of his gains for the day when he made consecutive double bogeys on Nos. 17 and 18 for a disappointing close to his day.

Getting off to a fast start is nothing new for Leonard. At last week’s Canada Life Series tournament, also at TPC Toronto, Leonard fired an opening 66 followed by a 2-under 69 that left him tied for the lead with Cao and Andrew J. Funk with a round to play. Leonard closed with a 75 that left him tied for ninth. He seemingly forgot about that frustrating final round, although it took him a while to get going. Playing the Heathlands Course’s back nine first, Leonard made two birdies and two bogeys to turn at even-par. He then turned it on, making four consecutive birdies—and seven total—over his final nine to shoot a 29, matching the low nine-hole score of the Series (Blair Bursey in the third round of the second Bear Mountain tournament).

“Funny enough, I switched my putting grip through six holes and kind of went off after that on the back nine,” said Leonard, who went with the claw grip for his final 12 holes. “It was perfect with no wind and easy to take advantage of it out there. I decided it was worth a change and it worked out.”