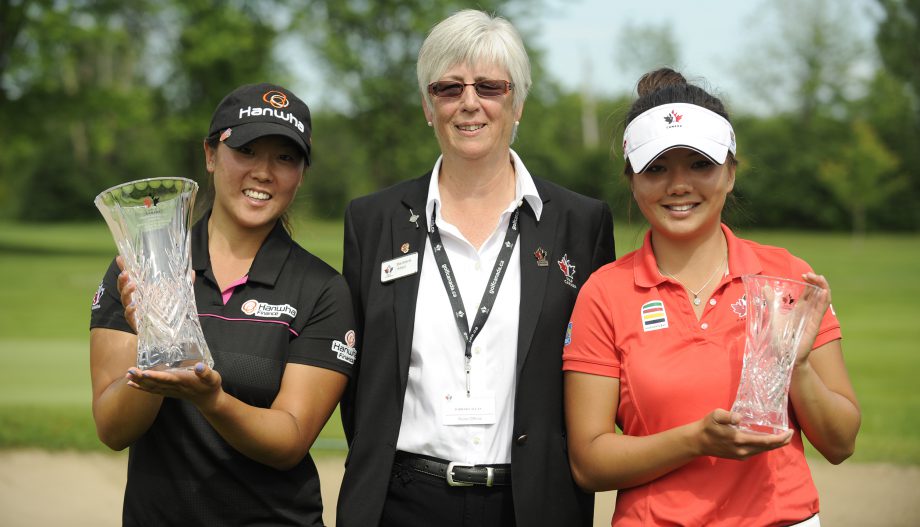 Lee-Bentham opened the day in a three-way tie atop the leaderboard. The National Team Young Pro Squad member distanced herself from the pack and secured the victory by shooting the low round of the day – a 2-under 69. “I went out with a really relaxed mindset which helped me to concentrate on each shot more and not worry about results. I think that’s what helped me today,” said the Toronto native when asked about her combined 2-under 140 performance.

With the victory, Lee-Bentham not only takes the $10,000 winner’s share of the tournament’s $60,000 purse, she has also secured an exemption into the 2015 Canadian Pacific Women’s Open to be played August 17-23 at the Vancouver Golf Club in Coquitlam, B.C. “It’s good knowing that I secured the spot. The CP Women’s Open is probably my favourite stop on tour, so just to have the opportunity to play in it again this year is a blessing,” reflected the Team Canada member.

Lee-Bentham’s Young Pro Squad teammate Brooke Henderson returned to her home course and finished one shot shy of the winner. The 17-year-old registered a bogey on her first hole, but finished the round without another to go with two birdies. The two Young Pro Squad members’ under-par rounds were the only ones of the tournament.

Brittany Henderson, the elder of the two Henderson sisters, finished in a five-way tie for third place. The rookie on the Symetra Tour carded a second-round 73 and completed the competition at 4-over 146.

Joining Brittany Henderson for a share of third was National Team Amateur Squad member Jennifer Ha. The Calgary native was one of four players to notch back-to-back 73s; the only difference is that the Ha was the lone amateur to do so. “It was an up and down sort of day,” said Ha of her round. “I hit the ball well and overall, I’m pretty happy with the way I played. Winning low amateur has made this event extra special.”

Ha sees the honour as a stepping stone as she heads into an important summer. “It gives me a lot of confidence going into the season. It’s going to be a big year for me as I get ready to become a professional. It gives me a boost knowing that I can finish high at a professional event. Hopefully this trend continues and I can build upon the success I found here.”

For a second day in a row, the Canadian National Team contingent fared well. Brittany Marchand of Orangeville, Ont., finished in a four-way tie for eighth with a score of 5-over. Thornhill, Ont., native Elizabeth Tong equaled her first-day 74 for a share of 12th place while London, Ont., product Maddie Szeryk was T14 at 7-over. Of the 23 amateurs in the field, the four National Team Amateur Squad members finished at the top.

Rebecca Lee-Bentham joins Michelle Piyapattra of Corona, Calif., as the winners of the first two legs on the 2015 Canadian Women’s Tour. The Tour’s third and final stop, the PGA Women’s Championship of Canada, will be contested July 20-22 at Burlington Golf & Country Club in Burlington, Ont. In addition to the exemptions awarded to the Tour champions, the top two competitors on the Jocelyne Bourassa Order of Merit, who are not otherwise exempt will join the trio at Canada’s National Women’s Open Championship, provided they have played in at least two of the three Tour events.

The five highest ranked players on the Canadian Women’s Tour Order of Merit will also be awarded direct entry into the second stage of LPGA Qualifying School.