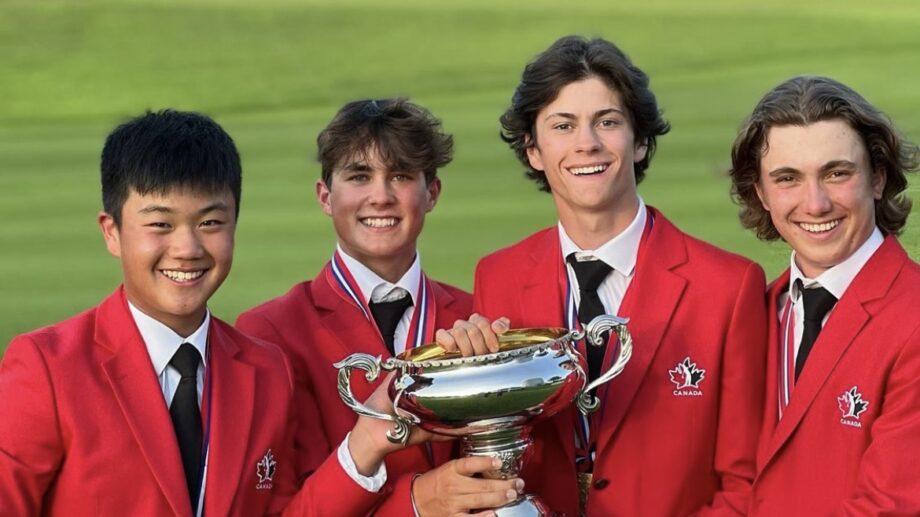 TSU, Japan – Canada Day is still a week away but there was reason to celebrate early for Team Canada’s National Junior Squad in Japan on Friday.

Canada’s team victory at the World Cup is its first in the 28-year history of the event. Rob McMillan (1994) and Corey Conners (2009) have previously been crowned individual champions of the tournament representing the Maple Leaf.

Consistency was the key to success for the Boys team, who each recorded top-10 results or better in the individual competition. Bouchard and Humphreys spearheaded the Canadians, the pair finishing at eight-under par for T5, while Wilson closed the tournament at seven-under par for T8 and Zhao wrapped up his World Cup in T10 at six-under par.

None of the members of four-man squad carded a score higher than 73 over the course of the three-day event at the Hakusan Village Golf Club in Tsu City, Mie Prefecture, Japan. Bouchard earned the low score of the week amongst the Canucks, firing a six-under par 66 in the second round of the international competition.

Team Canada’s Junior Girls – made up of Nicole Gal (Oakville, Ont.), Michelle Liu (Vancouver, B.C.), and Yeji Kwon (Port Coquitlam, B.C.) – secured a well-deserved top-3 finish of their own. Gal’s T4 result in the individual competition charged the Canadians to a podium finish, totalling an eight-under par score as a team, just one stroke shy of the Japanese in second place.

Kwon’s opening round three-under par 69 was matched by her teammate Gal the following day, and stood as the low scores of the week for the Canadian girls.

Canada’s third place finish matches their best result (T3 in 2018) since the Girls division was added to the global golf tournament in 2014.

Spain ran away with the Junior Girls division, winning by seven strokes over Japan. The Spaniards were lead by Andrea Revuelta, Cayetana Goicoechea and Fernández Garcia-Poggio, who finished tied atop the individual female leaderboard at seven-under par.

Conners, Adam Hadwin, Adam Svensson and Nick Taylor are other names to have previously represented the red and white at the marquee international event. Master’s champions Scottie Scheffler (USA) and Hideki Matsuyama (Japan), along with John Rahm (Spain) and Cam Smith (Australia), have also sported their countries colours at the World Cup since it began 1992.