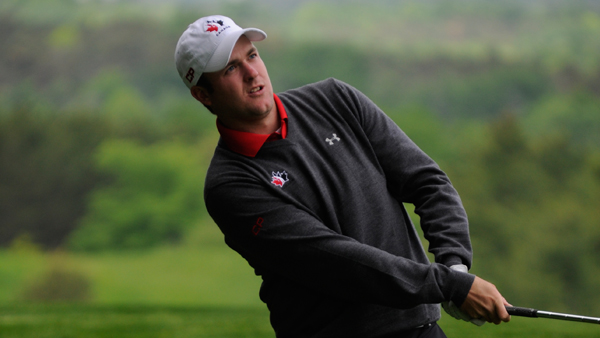 This could very well be the biggest win of Pendrith’s amateur career – he also won the prestigious Porter Cup in 2013. With the win, the recent Kent State graduate continues a very successful season that saw him earn Co-Mid-American Conference Golfer of the Year honours in addition to shooting up the World Amateur Golf Rankings (WAGR), where he currently sits at No. 46.

Svensson, a Surrey B.C. native, made his move up the leaderboard with a 66 on Saturday to climb into second place, sneaking past Team Canada teammate Rank. Svensson continues to impress after winning this year’s Jack Nickalus award for the most outstanding golfer in NCAA Div II golf for his remarkable seven-win season at Barry University.

Hailing from Elmira, Ont., Rank carded rounds of 66-66-68-72 to finish at 8-under for the tournament, dropping slightly to a tie for third after Saturday’s final round. The University of Waterloo graduate is playing great golf as of late – he won the National Golf Club Invitational one week earlier.

Chris Hemmerich of Kitchener, Ont., also cracked the top 10. The Guelph University graduate demonstrated strong consistency with rounds of 70-68-66-69 to come in at 7-under in a tie for fifth. The 21-year-old showed great poise after experiencing the tough competition at PGA Tour Canada’s PC Financial Open two weeks ago – his first professional event.

Listowel, Ont. native Corey Conners rounded out the National Amateur team, finishing at a very respectable T17 in the strong field at the MIC, one of the more prestigious amateur golf events. The 22-year-old finished at 2-under – he also shares Co-Mid-American Golfer of the Year honours with Pendrith.

Team Canada is officially on fire after coming out of last week’s training camps on home soil. The women’s squad mirrored the success of the men in New York at the Porter Cup, where Brooke Henderson took the field by storm to win with a final round 62. All members of the women’s squad landed inside the top 20 at the event, as well.