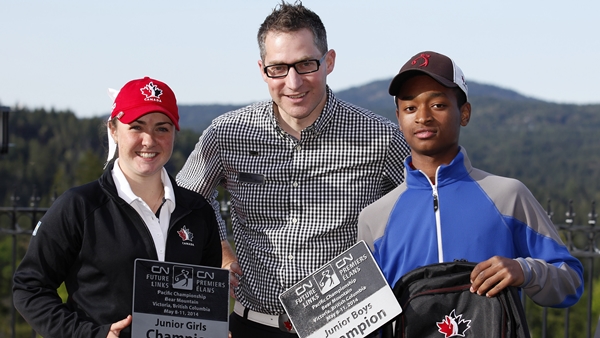 In the Junior Girls division, Team Canada Development Squad member Tanguay, 18, of St-Hyacinthe, Que., outlasted West Vancouver’s Alix Kong in a sudden-death playoff. The duo both birdied the par-5 18th hole to send the Junior Girls division into extra holes and Tanguay was declared the winner after Kong missed a short par putt on the first playoff hole.

“I’ve been in some playoffs, but this one was different because I played with Alix three days in a row,” said Tanguay. “This tournament was important for me because I won’t be playing in it next year since I won’t be a junior and I wanted this win so badly so it was great.”

With this victory, Tanguay carries momentum into the upcoming Canadian Women’s Tour stop this week at Morningstar Golf Club in Parksville, B.C.

“I played well on this course it was really difficult and I know Morningstar is a difficult too,” she continued. “If I was able to play well here I’ll be able to do it there too.”

Tanguay finished the championship at 11-over 224 after rounds of 71-81-72, while Kong finished in solo second after rounds of 80-71-73. Team Canada Development Squad member, Naomi Ko, 16, of Victoria finished in third at 12-over 225. Richmond, B.C. native Alisha Lau finished in fourth at 13-over, one stroke ahead of Michelle Kim of Surrey, B.C.

In the Junior Boys division, Alex Francois, 16, of Burnaby, B.C. held on to win by a stroke over Vancouver’s Jordan Lu. Francois carded a final round 2-over 73 to post a 4-over 217 for the championship.

“I was playing very well this week but I struggled a little on the greens,” Francois said. “I knew that if I could fight my way through the tough greens I’d be good and in the second round I made zero three-putts and I think that was the key to my win this week.”

The top six competitors in the Junior Boys division of each of six regional CN Future Links Championship being held in 2014 earn exemptions into the 2014 Canadian Junior Boys Championship, which will be contested July 28 – August 1 at the Legends on the Niagara (Battlefield Course) in Niagara Falls, Ont. The Junior Girls champion from each 2014 CN Future Links Championship earns an exemption into the 2014 Canadian Junior Girls Championship which runs July 28 – August 1 at Thornhill Golf and Country Club in Thornhill, Ont.