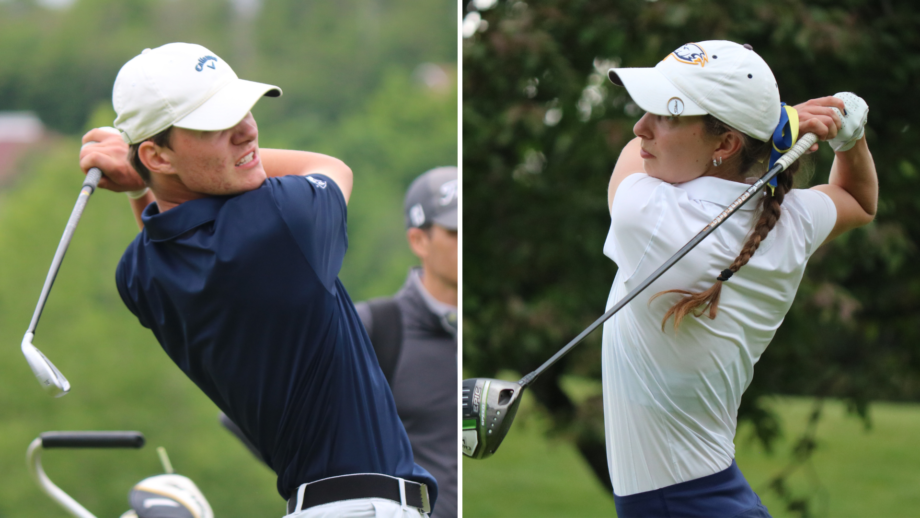 Bromont, Que. – The University of British Columbia Thunderbirds improved their leads in the men’s and women’s divisions in the second round at the 2022 Canadian University/College Championship, presented by BDO.

“We brought four really good women here and there are five left at home that also could have won this event […] so [as a team] we are not here without those girls,” said Shania Remandaban on UBC’s depth on the women’s side.

On the backs of Sonja Tang’s 5-under 67 and Remandaban’s 3-under 69, UBC strengthened their grip on the women’s team division and head into the third round with a 55-stroke lead.

The men’s team also cemented their lead atop their division with a trio of 1-under par performances from Aidan Schumer, Ethan DeGraaf and Dylan MacDonald, and an even par showing for Mackenzie Bickell.

“I think resilience is number one; our coach is always trying to get us to play smart and keep grinding,” says Aidan Schumer on the strength of UBC’s men’s golf team.

The University of Victoria Vikes men’s team carded the low round of the day, shooting a collective 9-under in the team competition to jump six spots on the leaderboard into second place. Each of the five players were under par on the day: Zachary Ryujin (-4), John Morrow (-3), Aidan Craig Steele (-1), Marlon Neto-Bradley (-1) and Robin Canlan (-1).

Despite a stellar effort to etch his way back into the competition, Morrow says the best is yet to come from him and knows he’ll have to go low over the next two days to be in contention for the individual title.

“I was able to keep it respectable yesterday, but I still don’t feel like I am controlling the golf ball very well,” said Morrow. “I’m going to have to play solid, hit a lot of greens and make some putts.”

Breton Gagnon recorded a 5-under 67 for the second time in as many rounds and holds a four-stroke lead halfway through the competition. The 18-year-old’s 10-under is the lowest 36-hole score in the event since Scott Secord’s 11-under in 2014.

Labbé’s 1-over par 73 brought her to 3-under on the tournament – two strokes ahead of Tang in second place. Grace Bell and Remandaban, also Thunderbirds, hold the third and fourth place spots, respectively.

The highlight of the day came from Remandaban at the 133-yard, par-3 11th hole. The 2019 runner-up fired her tee shot at a blind front-right hole location and knew it was good, but didn’t know how good. She would find out soon enough just how good it was.

Thomas DeMarco (University of Windsor) recorded six birdies on the day and sits in a tie for second place with UBC’s Schumer. Alexis Leray (Université Laval) is alone in fourth at 5-under after a 69 in round two.

After the third round, the field will be cut to the low ten (10) Male teams and the low six (6) Female teams, including any team within 15 shots of the lead.  Individuals within 10 shots of third place, including any player within the top 10, will also make the cut.

Click here for more information including the leaderboard, third round pairings and course information.