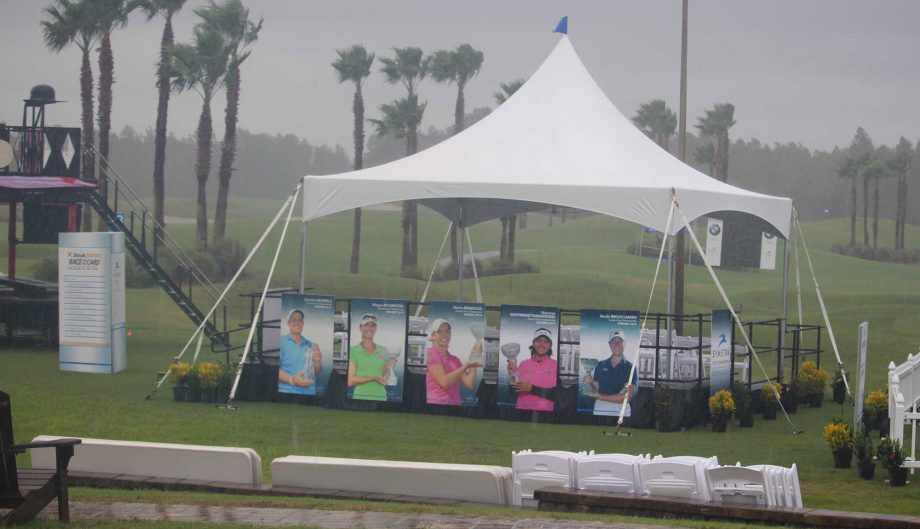 The Symetra Tour Championship has been shortened to a 54-hole tournament due to significant rain and saturated course conditions at LPGA International in Daytona Beach, Fla. The tournament, which has been suspended since one hour and 55 minutes into first-round play, is now scheduled to finish on Monday, Oct. 9.

The first round started on time at 8 a.m. on Thursday. Weather intensified around 9:30 a.m. and play was suspended at 9:55 a.m. While still recovering from the effects of Hurricane Irma, LPGA International received 2 1/2 inches of rain on Thursday, to total more than 6 1/2 inches of rain in the past week. Rain is also forecasted for the Daytona Beach area through the weekend and into early next week.

“Our staff is working tirelessly alongside the LPGA International crew to make the course playable,” said Mike Nichols, Chief Business Officer of the Symetra Tour. “We want to ensure we have a fair, competitive tournament to determine our final champion of the year, as well as the 10 players who graduate to the LPGA next season.”

Round one is currently scheduled to resume Friday at 2 p.m. local time. The starting times for the groups in the original second wave of round one will now begin no earlier than 4:45 p.m., with the last time being 6:13 p.m. Second-round starting times will be on Saturday and published later today.

The cut will be made after 36 holes with the top 60 players and ties advancing to the final round. The final two hours of play will be broadcast on Facebook Live, with specific timing to be announced at a later time.