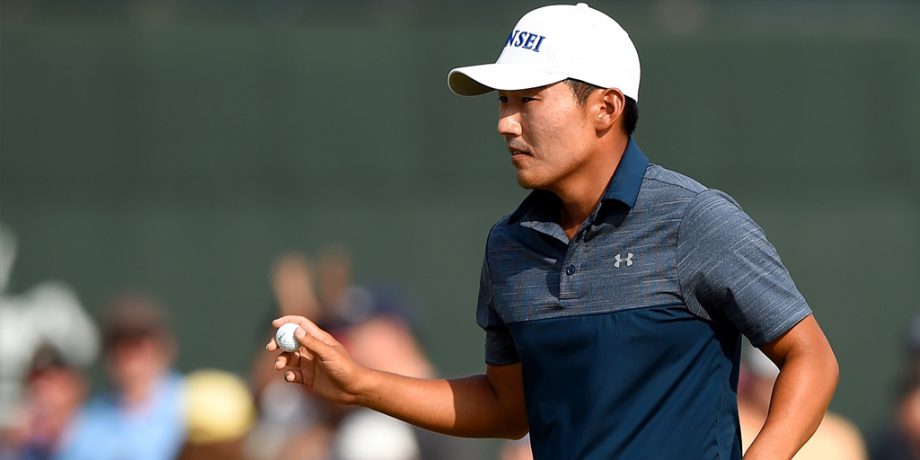 HUMBLE, Texas – Sung Kang shot a 1-under 71 to hold a three-shot lead over Rickie Fowler after the third round of the Houston Open on Saturday.

After shooting a tournament course record 9-under 63 on Friday, Kang took a commanding six-shot lead with a 36-hole tournament record of 129 through two rounds.

However, on Saturday, it was Fowler’s day to chase history, shooting a 5-under 67 to trim Kang’s lead as they head into the final round.

After Thursday’s 8-under 64, Fowler held a one-shot lead over Kang after the first round, but slipped to fourth on Friday with a 71. He returned to form on Saturday and has a PGA Tour career-best 22 birdies through three rounds.

Kang, the 29-year-old South Korean who entered the week ranked No. 202 in the world, could earn an invitation to next week’s Masters with a win on Sunday.

Playing one hole behind Fowler throughout the day, Kang played in the shadows of Fowler’s stardom and the roar of the crowd rooting for a big comeback.

Kang gave up the lead briefly after a putt lipped out of the hole on 16 by taking a full circle around the cup before sneaking out.

On the final two holes of the day, however, it was Fowler who had his share of misfortunes on his putts. He bogeyed on 17 and double-bogeyed on the 18th hole to give Kang a little more breathing room heading into the final round.

Nick Taylor of Abbotsford, B.C., was tied for 32nd place after shooting a 74. Dundas, Ont., native Mackenzie Hughes was in a tie for 39th with a 73.

Sunday’s tee times have been moved up to 7:15 a.m. to 9:15 a.m. Central with threesomes off split tees to try to avoid heavy thunderstorms and rainfall expected in the late morning to early afternoon.

Heavy winds approaching 25-30 mph at times and cloudy skies resulted in much higher scores on Saturday than were seen on Friday, with the average score around 1 over par.

Kang will be grouped with Fowler, something both players said they look forward to as they enter the final round. Kang has never led a tournament on the PGA Tour after three rounds. He said he was well aware of Fowler’s pursuit on Saturday, thanks to the crowd.

“I heard a lot of noise in front of us so I was like, ‘Oh, I know something big is going on up there,”’ Kang said.

Fowler said he’s ready to shake off his struggles on the last two holes.

“I drove it well, hit a lot of fairways, hit a lot of greens and made some good putts,” Fowler said. “I’m not looking at the last two holes. It was a great day of golf, and I put myself in a position to win a golf tournament tomorrow.”

Fowler said he likes the challenge of playing from behind and hopes to put some pressure on Kang.

Kang said he’ll be playing conservatively and defensively, especially with the strong possibility of inclement weather on the way.

For the third straight day, however, Kang insisted that he doesn’t have his sights set on earning a last-minute invitation to the Masters.