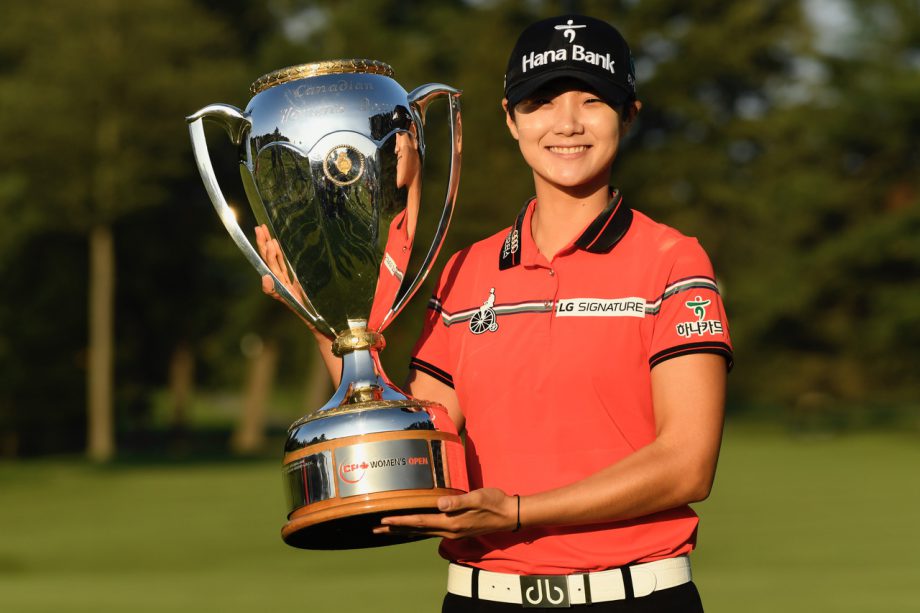 OTTAWA – Now that she’s won two LPGA championships, Sung Hyun Park is finally going to get to see the biggest attraction in her home away from home.

Park shot a 7-under 64 to finish at 13-under par to win the CP Women’s Open on Sunday, five weeks after winning the U.S. Women’s Open. Both wins came in her rookie season on the LPGA Tour and she feels it’s time for a rest, so she’s returning to her North American home in Orlando to relax.

“I’ve never been to Disney World. I think I’ve got to go this time,” said Park through a translator. “I have a dog named Ato. It’s been a while since I’ve seen my dog, so I’m planning to play with my dog during my vacation.”

Park started the day in a tie for 12th, but played a bogey-free final round with seven birdies – including back-to-back birdies on the Nos. 8 and 9 holes – to storm up the leaderboard. She had already sewn up the championship by the time the final groupings were on the 18th fairway.

“I feel a little nervous when I play in the last group. But I was not today,” said Park. “Today I was in an earlier group when I started, so I felt a little more comfortable when I played this round.”

Fellow Korean Mirim Lee finished second at 11 under, while China’s Shanshan Feng, Korea’s In Gee Chun, Denmark’s Nicole Broch Larsen and Americans Marina Alex and Cristie Kerr were in a five-way tie for third at 10 under.

Broch Larsen and American Mo Martin had been co-leaders at 10-under to start the day.

“Sung Hyun had a really good round today. But I don’t know, my game was not really bad,” said Chun. “I’m happy for her to win this week. I’ll just keep going to next week.”

Brooke Henderson of nearby Smiths Falls, Ont., shot an even-par round to finish at 7 under to tie for 12th, a disappointing result after her course-record 8-under 63 catapulted her into a tie for sixth after three rounds. The 19-year-old phenom drew the most fans of any golfer at the Ottawa Hunt and Golf Club and was followed from hole to hole by a sizable gallery.

“I wasn’t nervous, but I had some tension,” said Henderson. “I wanted it so badly that it kind of affected me a little bit with some of the shots that I hit. Some of the putts, they were so close to going in, and it kind of got me down a little bit that they just rubbed the edge or stayed on the lip a couple times.”

Brittany Marchand of Orangeville, Ont., was the only other Canadian to make the cut. She shot a 2-under 69 to finish at 3-under par on the tournament and tie for 30th.

“It was a rough start, but overall I played well. Like after the first few holes,” said Marchand. “It was a good day. I think it was what I kind of wanted to finish the tournament.”

Park believes that the key to her success in her first year on the LPGA Tour is that there are no expectations on her, so if she makes a mistake there’s little consequences.

“Because I am a rookie, I don’t really worry about every shot,” said Park. “I just did every shot with confidence. My confidence made me do well this year.”

Michelle Wie had to withdraw from play between the third and fourth rounds so she could have an emergency procedure to remove her appendix at Ottawa Hospital. Canadian Pacific, the title sponsor of the event, donated $2 million to the Children’s Hospital of Eastern Ontario before play began on Sunday.