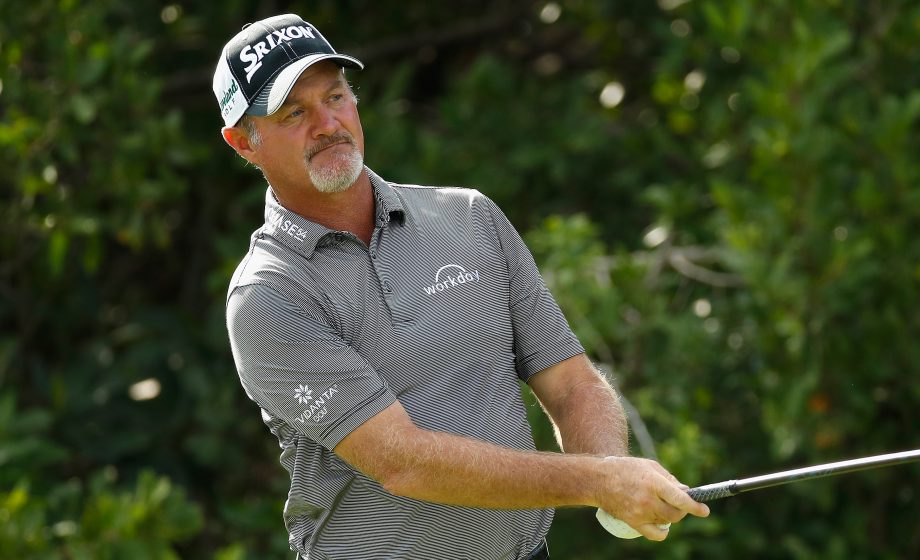 NAPLES, Fla. – Steve Stricker returned from a long layoff to team with Jerry Kelly to take the first-round lead in the Franklin Templeton Shootout.

The Madison, Wisconsin, duo shot a 16-under 56 on Thursday in the scramble format for a one-stroke lead over Harris English and Matt Kuchar at Tiburon Golf Club.

“It was just a great team effort today,” Stricker said. “We both played well. We both kept the pedal down all the way around, we never let up. We made a lot of good birdies, threw in an improbable eagle at the sixth hole, but other than that it was just good, solid golf all the way around, all the way to the end. Usually we have little hiccups here and there or a little lull period and today that never happened. We just continued that good play every hole really.”

On the eagle, Stricker holed a breaking 60-footer on the par-5 sixth.

“The pin was in a very difficult position kind of on the left side of the green,” Stricker said. “It was kind of up and over and speed was tricky. He put a good putt on it, on the first one. It was difficult, it had a lot of break. But speed was the issue and he gave me great speed and the line because I ended up giving it a little bit more.”

The 49-year-old Stricker had not played since the Deutsche Bank Championship on Labor Day. He’s teaming with the 50-year-old Kelly for the record eighth time. They won in 2009, and Kelly also won with Rod Pampling in 2006.

“We know everybody’s going to get in the fairway and get on the green in this format, so it’s really rolling in the putts,” Kelly said. “I just need to do my job and hit solid putts, so he can see where the line is and make it like he does.”

Harris and Kuchar won in 2013 in their first start together and finished second the last two years.

Charles Howell III & Rory Sabbatini were third at 59, and defending champions Jason Dufner and Brandt Snedeker were at 60 with Kevin Chappell-Kevin Kisner and Luke Donald-Russell Knox.

Lexi Thompson and Bryson DeChambeau were eighth after a 62. Thompson is the second woman to compete in the event, following Annika Sorenstam with Fred Couples in 2006.