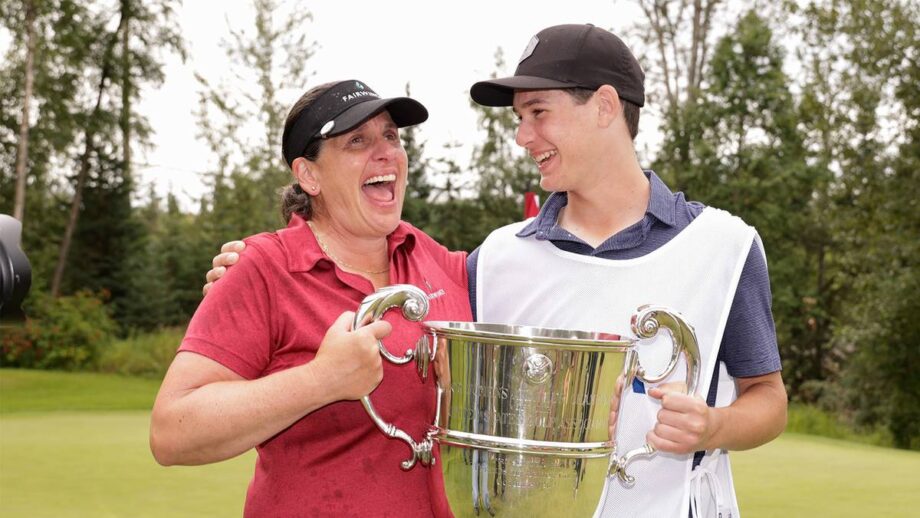 Shelly Stouffer joined 3 other fellow Canadians as a U.S. Senior Women's Am champion, but the first to do so in Alaska. (USGA/Steven Gibbons)
United States Golf Association

In one of the most dominant performances in championship history, Shelly Stouffer breezed through the bracket to win the 60th U.S. Senior Women’s Amateur at Anchorage Golf Course. Stouffer put an exclamation point on the week with a resounding 4-and-3 victory over Sue Wooster in the 18-hole final to become the fourth Canadian to win the title.

Moments after Wooster missed an 8-foot birdie putt on the 15th, Stouffer, 52, of Nanoose Bay in the province of British Columbia, calmly rolled in a 3-footer for par to end the match. She raised her arms in celebration and hugged her 15-year-old son, Brett, who caddied for her throughout the championship in Alaska. It was an emotional end to a fulfilling week, the winning moment made all the more special because they could share it together.

“He knows my game because we play a lot together,” said Stouffer. “He was helping with reading the greens. He knows my clubs. He was awesome. He kept me calm.”

Stouffer sprinted out to an early advantage against Wooster and never looked back. She birdied the first hole to take a 1-up lead and doubled the lead with a winning par on the fourth. Stouffer moved three ahead when Wooster double bogeyed the par-5 sixth, and followed with wins on Nos. 8 and 9, the latter with a birdie, to take a commanding 5-up lead at the turn.

“I’ve been feeling really good about my game, and I didn’t really have a lot of nerves,” said Stouffer. “We kept to our game plan. I’m like, ‘Why change it now?’ And it totally worked in my favor, I think.”

Few would have guessed that Stouffer would raise the trophy after her inauspicious start on Saturday. She made five bogeys and two double bogeys in Round 1 of stroke play, needing 37 putts in a 9-over-par 81 that left her T-45.

But the next day, Stouffer was a completely different player. She rebounded with a 4-under 68 in Round 2 – the lowest in the championship by five strokes – to earn the No. 2 seed in match play. Stouffer never looked back, winning 37 holes and losing just eight over the course of her six matches.

For Wooster, it was another disappointing defeat in a Senior Women’s Amateur championship match – her third in the last four years. Her 15 match-play victories since 2018 are second only to three-time champion Lara Tennant in that span, but the 60-year-old Australian has no hardware to show for it.

A day after coming back from a 3-hole deficit against Christie Blasi in the semifinals, Wooster could not turn the tide against Stouffer. She managed to win only one hole on the day – with a par on the 14th – but it was too little, too late.

“I’m so proud of myself for making three finals in four years,” said Wooster. “I’m not going to give up on winning this trophy one day. It didn’t happen today, but things happen in funny ways. I think my day will come.”

What the Champion Receives