Step into a ruling… 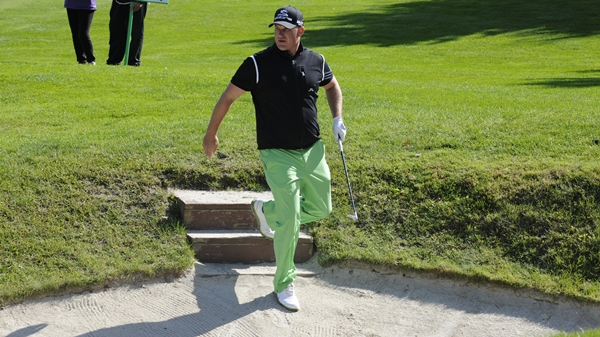 Despite cooler than seasonal temperatures last week, the Canadian Men’s Mid-Amateur was contested at the Barrie Country Club in Barrie, Ontario, which featured some fantastic golf from the Mid-Amateur (25+) contingent. Barrie Country Club is no stranger to hosting championship golf, having previously hosted the PGA of Ontario Championship a record ten consecutive times (2003-2012), as well as the Ontario Open (1975), Ontario Women’s Amateur (1976, 1989) and the Ontario Men’s Amateur (1985).

Having had the opportunity to conduct the championship as Tournament Director, I would be remiss if I didn’t mention the tireless efforts of the Barrie Country Club, it’s host organizing committee, staff and volunteers. The championship was first-class and a very successful conclusion to the season as we crowned our final national amateur champion of the year, Garrett Rank.

As successful as the championship was, the classic layout at Barrie Country Club tested competitors each and every round, placing a premium on shot making. Further, competitors were met with a unique pair of immovable obstructions in the greenside bunkers on the difficult par-5, sixth hole. In the photo below, you’ll see a set of stairs in each of the greenside bunkers, the only ones found on the golf course.

From clarification provided in Decision 24/12, the wooden steps are obstructions, and while they are not deemed to be in the bunker, relief is available from the steps whether or not the ball lies in the bunker. However, there is an additional relief option provided in circumstances where a player has interference and wishes to take relief from an immovable obstruction for a ball that lies within the bunker.

For a player to take relief in this situation, where the ball lies in the bunker and interference exists, they must follow the procedure as outlined in rule 24-2b(ii), which provides the following:

In a Bunker: If the ball is in a bunker, the player must lift the ball and drop it either:

(b)  Under penalty of one stroke, outside the bunker keeping the point where the ball lay directly between the hole and the spot on which the ball is dropped, with no limit to how far behind the bunker the ball may be dropped.

The interference produced by the wooden steps provides the player with two options when the ball lies in the bunker, granting the player – at the cost of a one-stroke penalty – to relief outside of the bunker. It is important to note that it is the position of the ball that ultimately determines the manner in which the player may take relief from interference by an immovable obstruction.

While there is a unique relief procedure within a bunker, there is also special consideration for relief procedures through the green, on the putting green and on the teeing ground, each of which can be found under rule 24-2 of the rules of golf. Next time you step into a ruling, be sure to consider all of your relief options, depending on where the ball lies.

For more information on the rules of golf, please click here.

For more information on how to proceed in various rules of golf situations, guidance on the Golf Canada Handicap System and more, please consult our rules of golf publications – for purchase in Golf Canada’s eStore, or at your local book retailer.