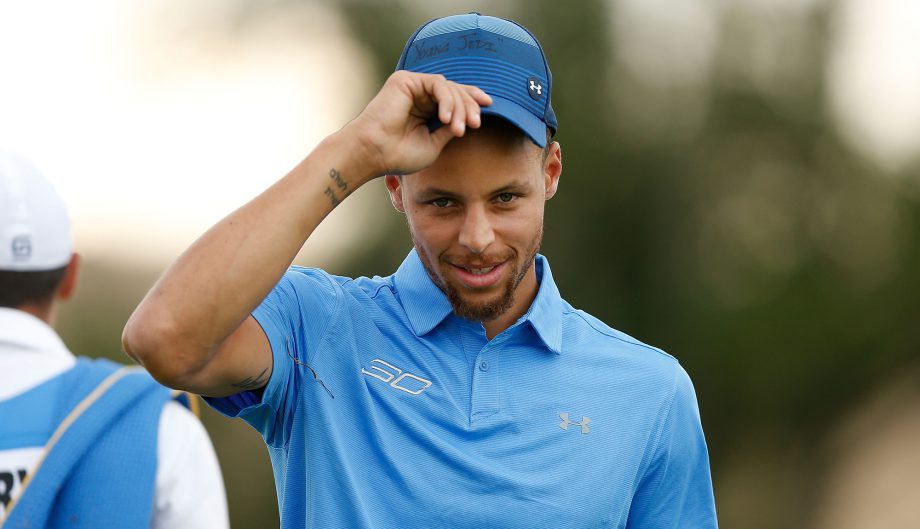 HAYWARD, Calif. – Stephen Curry pumped his right fist, raised his arms in the air with club in hand and gave a firm shoulder bump to caddie Jonnie West, his golf partner on road trips with the Golden State Warriors.

A birdie at last after he scored three bogeys over his initial five holes Thursday.

There was the animated, confident Steph that NBA fans know so well, the two-time league MVP finally feeling it and making the tough shots on the challenging course at TPC Stonebrae while playing in his highly anticipated professional golf debut. He finished at 4-over 74 with a bogey on the last hole.

“It was an amazing experience, I’ve been looking forward to this since I found out and to finally hit my first shot in tournament play was a really, really nervous moment but it was everything I hoped for,” Curry said. “If you told me I was going to shoot 74 going into the first round I’d take that all day, every day. I’m pretty happy with it.”

Curry drew quite a crowd to the Web.com Tour’s Ellie Mae Classic, where Hall of Fame wide receiver Jerry Rice has played a few times in the past.

Curry, who munched on a breakfast sandwich at the green of his first hole, missed badly on his initial ball of the day, landing his tee shot off a hill that kicked it perfectly into the cup holder of a golfcart. He then took a drop.

Not quite as spot-on as those signature pregame tunnel shots at Oracle Arena or the jaw-dropping, buzzer-beating 3-pointers from way, way back.

“That’s probably a first on the tour. There was a golf cart just left of my target on hole No. 1 and it went right in the cup holder,” Curry said. “Not an ideal way to start with calling a rules official over after your first tee shot. I kind of settled in after that.”

On the 15th fairway, Curry leaned on West, a member of Golden State’s front office and son of Hall of Famer Jerry West. Jonnie West also is a member at this course.

Then Curry finished the par-5 15th by sinking a 5-foot, downhill birdie putt. He made par on No. 16 then survived a tee shot to the bunker and a near stumble climbing out of the sand on the par-4 18th and made about an 8-footer to save par.

That prompted a triumphant club tap to his shoe and Curry then held up the ball sporting a big grin.

“It was awesome,” West said. “He handled the nerves of this being his first time in this type of atmosphere pretty well.”

Curry began his round on the back nine and was 2-over 37 at the turn, where he eagerly accepted a bag of fast food chicken for lunch.

He said that when his name was announced to begin his day “I could barely feel my hands, I had to try to take a deep breath.”

The top 65 and any ties from the 156-player field will make the cut to compete on the weekend. Curry is a sponsor exemption and one of three amateurs in the event.

“I want to play better tomorrow. Now that I kind of got the jitters out hopefully that will happen and hit a couple more good shots and make a couple more putts,” he said.

With so many cameras clicking, cheers and whistles moments after he struck the ball and hundreds of supporters in No. 30 shirts and Warriors gear, this was no doubt a “Strength In Numbers” kind of day.

There would be no balls lost, either. Wherever his shots landed, a big crowd quickly gathered to get an up-close glimpse of one of basketball’s best. One of the biggest bargains in the NBA before, Curry was rewarded last month with a $201 million, five-year contract.

Playing his other sporting passion, Curry got plenty of help along the 7,024-yard, par-70 course. Those with homes along the course gathered in groups on decks to catch a hole.

On this day, it was Jaeger making a key assist down the stretch. Waiting at the tee box on their final hole, he took a basketball belonging to 14-year-old Erik Oswald from Southern California for Curry to sign and delivered it back to the giddy teen dressed in a chef’s hat who had followed his hoops hero all day.

“Unbelievable gallery out here,” Curry said, “hopefully that continues through the week.”