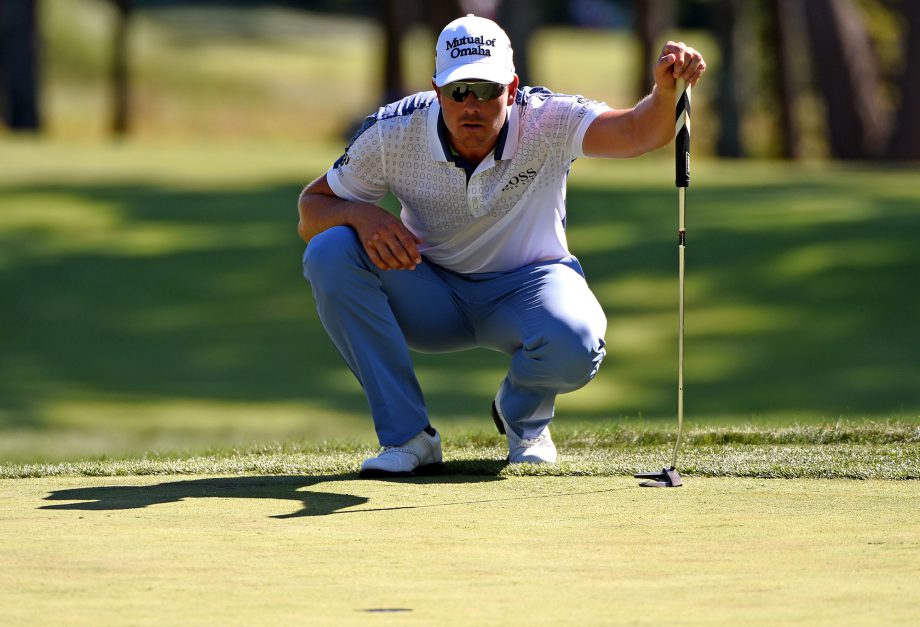 NORTON, Mass. – One 3-wood quickly put Henrik Stenson into the mix at the Deutsche Bank Championship. Another one helped to give him the lead.

Stenson drilled a 3-wood on the 298-yard fourth hole at the TPC Boston that hit into the bank and rolled up to 20 feet for an eagle that allowed him to bolt up the leaderboard. The Swede showed off his supreme strength on the par-5 closing hole with a 3-wood off the tee that left him only a 6-iron into the green for a two-putt birdie that gave him a 6-under 65 and a one-shot lead over Rickie Fowler.

Five shots behind going into the third round Sunday, Stenson made up that deficit in just seven holes. He can only hope to make up that kind of ground on a winless season during the final month of the FedEx Cup playoffs.

“It’s a good time to start playing well,” said Stenson, who was at 13-under 200. “It’s a big event and lots to play for. I’m happy with the progress I made and it gave me a little bit of a confidence boost last week that I had a nice tournament. I hope I can have another one here tomorrow.”

Fowler had a 67, missing out on a chance to share the lead when his 5-iron into the 18th was too strong and he had to scramble to salvage a par.

They all took advantage of a collapse by Charley Hoffman, who blazed his way to victory at the TPC Boston five years ago. After opening with a birdie, Hoffman put his second shot into the hazard at the par-5 second hole and made bogey, and it slipped away from there. He shot 41 on front, had five bogeys in a seven-hole stretch and didn’t make another birdie until his last hole for a 76.

Jordan Spieth was headed for a return to No. 1, and he’s not even here after missing his second straight cut.

PGA champion Jason Day would have to win the Deutsche Bank to go to No. 1 in the world, and the Australian finally hit the wall. Day made a double bogey on the reachable par-4 fourth hole and never quite recovered. He had a 73, his first round over par since closing with a 74 at the U.S. Open in June.

“There’s no excuse for poor playing,” said Day, who was nine shots out of the lead. “I just wish I had a little bit more energy.”

Rory McIlroy needs to finish 10th alone to remain No. 1, but he had to birdie his last two holes for a 71. He was 15 shots out of the lead. McIlroy, playing for only the second time since the U.S. Open because of an ankle injury, had made only nine birdies in 54 holes.

The biggest move might have been Hunter Mahan, the only player to never miss a FedEx Cup playoff event since the series began in 2007. Mahan faces elimination this week as only the top 70 advance to the third tournament, and he came in at No. 91. But he found a swing key on the practice, holed some putts and shot a 64 to bolt up the leaderboard into a tie for 11th. He has a chance to at least advance to Chicago in two weeks.

Stenson, however, grabbed most of the attention. He won the Deutsche Bank two years ago, and converted that into a $10 million bonus when he dominated the field at East Lake to win the Tour Championship. The runner-up finish (by six shots) to Day at The Barclays put Stenson in good shape for the FedEx Cup, and this could only help.

It’s a big course that favors big hitters, and Stenson is smashing it at the moment.

He made his move with a 7-iron into 6 feet on the par-3 third, and then drilling a 3-wood that climbed onto the green at the par-4 fourth hole and settled 20 feet away, setting up an eagle. He closed out the front nine with two more birdies, and Fowler was keeping pace behind him.

Stenson kept his cool on the back nine as the putts stopped falling. He missed four good birdie chances from 12 feet or in, but after another big 3-wood off the tee at the 18th, he hit 6-iron to the middle of the green for his two-putt birdie and the lead.

Fowler chipped through the 18th green and his ball got hung up in the rough. He did well to get up-and-down for a par to get in the last group with Stenson.

“He’s a strong, powerful player,” Fowler said. “And obviously, he’s playing well this week to be in the position he’s in. I’m looking forward to the two of us playing well, go head-to-head and seeing if one of us will be the one to come out on top.”

Still in range was Russell Knox, who hit one of the best shots of the week behind the 18th green. From about the spot Fowler was in, Knox drilled a pitch into the hill to kill the speed and watching it trickle down the slope to 3 feet for birdie and a 68 to get within three shots of the lead.