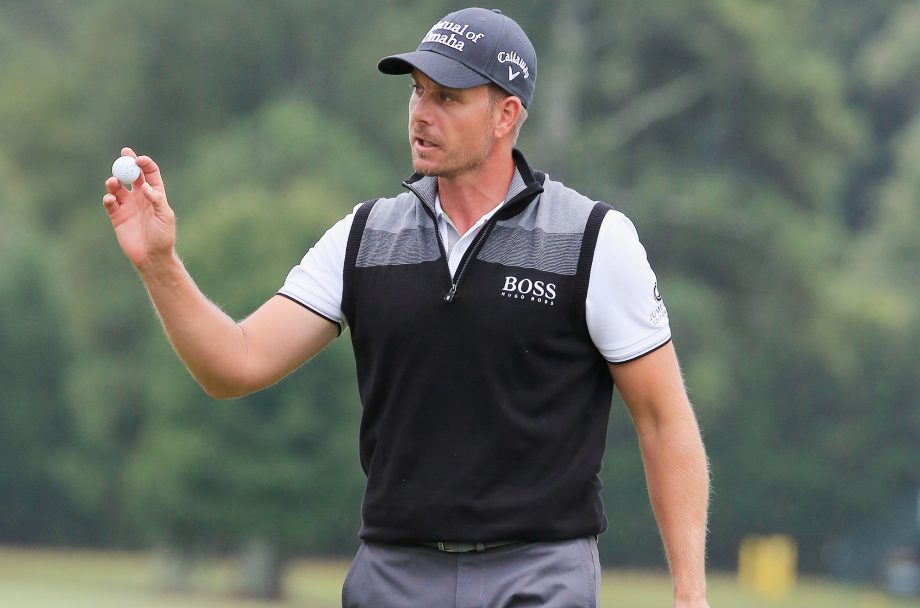 ATLANTA – Two years after Henrik Stenson sailed to victory at the Tour Championship, he has another comfortable lead after 36 holes at East Lake and Jordan Spieth is chasing him.

Back then, Spieth was a 20-year-old rookie.

Now he’s the Masters and U.S. Open champion, and he found a spark in a steady drizzle Friday.

Stenson overcame a few mistakes off the tee and was solid on the back nine for a 2-under 68, stretching his lead to three shots over Spieth going into the weekend and moving closer to his first win of the year – and a $10 million bonus for claiming the FedEx Cup.

“I didn’t feel like it was my best day, but I managed to keep it together and 2 under around here is never bad,” Stenson said.

He doesn’t know anything different. This was his sixth straight round under par at East Lake, a course where the Swede has led after every round he has played.

Spieth has made only one bogey over two rounds, and a pair of par saves on consecutive holes on the front nine felt just as valuable as his four birdies in a round of 66. The average score was 71.6 on a wet day that yielded only four rounds under par.

Spieth went from the right rough to the left rough on No. 5 and still had 60 yards left and a tree in front of him. He took a risk going through the tree to 6 feet for par, and then rolled in a 20-foot par putt for a bunker save on the par-3 sixth.

“It was huge,” Spieth said about the par saves. “I thought I may have to re-tee, and I was just kind of all over the place at that time. And that third shot I hit on 5, I mean, one of 10, maybe. There was no other option, but it wasn’t necessarily smart. And I had to have the wind blowing this branch back and forth, I had to hit it when it blew it this way or else it would have gone up into it.”

He closed with a 20-foot birdie putt on the par-3 18th to get into the final group.

Paul Casey made bogey from the bunker on the 18th for a 70 and was four shots behind, while British Open champion Zach Johnson birdied three of his last four holes to overcome a double bogey on the par-5 ninth. He had a 70 and was at 4-under 136.

Jason Day, in his first event as No. 1 in the world, finally looked human. He felt flat, wasn’t sharp off the tee or into the greens, and shot a 71. It was his third round over par in his last 10 tournaments, and it left him nine shots behind.

Stenson was four shots clear of Adam Scott after 36 holes when he won the Tour Championship two years ago, with Spieth another shot behind. Spieth made a late run on Sunday and tied for second, capping off a remarkable rookie season.

He is looked at differently now – the Masters and U.S. Open champion and looking more certain to be voted PGA Tour player of the year.

“He’s one of the best players in the world as we know, and had a fantastic year behind him,” Stenson said. “So he’s going to be a very tough contender throughout these last two days. He was good already back then, but he’s certainly not any less good now. We know that much. Once again, I’ve got to focus on my game and bring my game and keep my head down and foot down and press on if I want to leave the guys behind me.”

The biggest challenge figures to be East Lake, especially with more wet conditions in the forecast.

The Bermuda rough can be tricky when it’s dry because it can be difficult to judge how far the ball flies out of it. Wet rough is difficult in a different manner. It makes the course longer off the tee, and longer coming out of the thick grass.

Day hit a 3-wood from 195 yards in the rough on No. 5. Had it been dry conditions like Thursday, Day figures he would have hit 8-iron.

Stenson hit a 4-wood and a gap wedge to a front pin on No. 4 in the opening round. On Friday, he hit 3-wood off the tee and still had 6-iron to a back pin.

“That’s a two-club difference when the air is heavy and you’re not getting as much roll,” he said.

With a tougher golf course, Stenson said there will be a premium on making fewer mistakes. Spieth is happy to be on a course of this nature, especially after three weeks of watching players – mostly Day – pour in one birdie after another in low-scoring affairs.

It was demoralizing at times, especially when Day started 61-63 last week at Conway Farms.

“I wasn’t going to catch him last week,” Spieth said. “I say that now. You tell me that at the time and I’ll get mad at you. I don’t accept that, and that’s my personality. This week is a bit different because there isn’t a 22 under out there.”

But there’s still Stenson, and that could prove just as daunting.