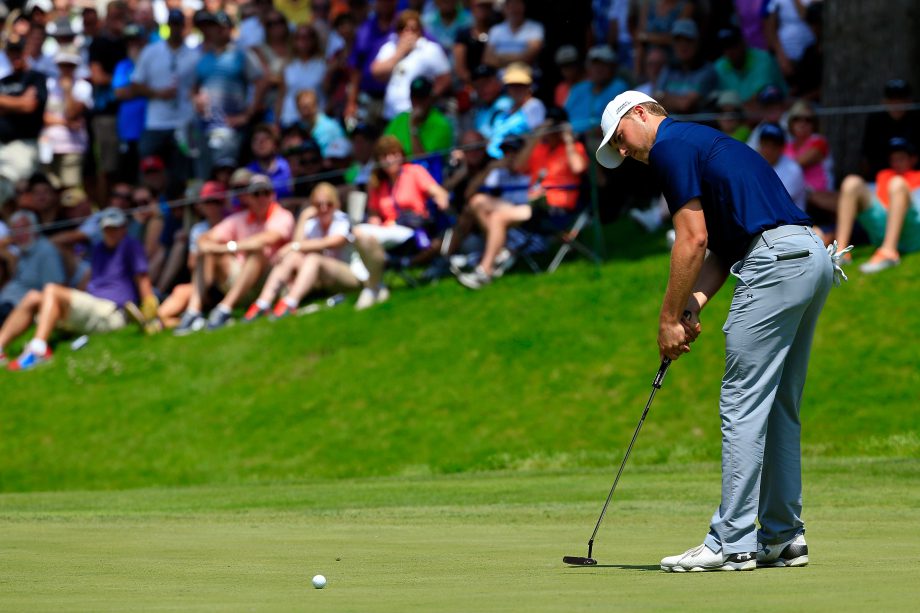 SILVIS, Illinois – Four holes into Friday’s second round, Jordan Spieth knew he was in danger of missing the cut.

The Masters and U.S. Open champion will head into Saturday knowing he’s got a shot at another win before the British Open.

Spieth bounced back from an even-par opening round with a 7-under 64 to give himself a chance to contend at the John Deere Classic.

Spieth, 21, still has a lot of work to do to catch the leaders, though.

Spieth said he knew he needed to shoot at least a 67 on Friday. He did better than that.

“It doesn’t matter if it’s a course that yields a lot of birdies. It’s still hard to do on the PGA Tour. I wasn’t taking it for granted. I was still searching,” said Spieth, who will try for his third straight major title next week at St. Andrews. “Once I got a couple of shorter putts to go in and got a little bit of breathing room, I was able to be patient knowing that there were other birdie holes left.”

Spieth took two weeks off after winning the U.S. Open and acknowledged he was rusty during his first round at the TPC Deere Run.

After opening with four straight pars Friday, Spieth finally got going with four birdies and an eagle over a remarkable seven-hole stretch.

The best hole of the tournament for Spieth came on No. 2. A 319-yard drive and a 241-yard approach left him with a 4-foot eagle putt.

Spieth needed just 25 putts Friday. This week is playing out similarly to his first tournament after winning the Masters. After opening the RBC Heritage in late April with a 74, Spieth shot a 62 in the second round.

“I knew I’d have my chances, and then my putter started working,” Spieth said.

Thomas, 22, has had something of a rivalry with Spieth for years.

They were two of the best college golfers in the country while Thomas was at Alabama and Spieth was at Texas – though Spieth has clearly outpaced Thomas in the pro ranks.

But it’s Thomas who heads into the weekend with the advantage.

Thomas opened play with a tournament-best 63 and followed it up with a solid 67. Thomas had five more birdies Friday, putting himself in position for his first career win after losing the lead with a dreadful back nine at last week’s Greenbrier Classic.

“I’ve had my opportunities and I’ve learned from my mistakes, learned from the times when I didn’t feel like I played or made the mental decision I felt like I should have,” Thomas said.

Zach Johnson won’t tee off Saturday with one of the top groupings.

But he’s in prime position for another strong finish at the TPC Deere Run.

Johnson, who won here in 2012 and has finished in the top three in five of his last six starts at Deere Run, strung together three straight birdies for a 68 – his 26th straight round in the 60s at this course.

Johnson is four back of Thomas at 8 under and one shot ahead of Spieth.

Canadian Roger Sloan posted a round of 3-under 68 Friday, while Adam Hadwin and David Hearn signed for a scores of 70 to play the weekend.  Nick Taylor missed the cut after a round of 72 today. Mike Wier withdrew from the competition after an opening round of 73.