Spieth, Simpson, Johnson tied going into final round at Kapalua 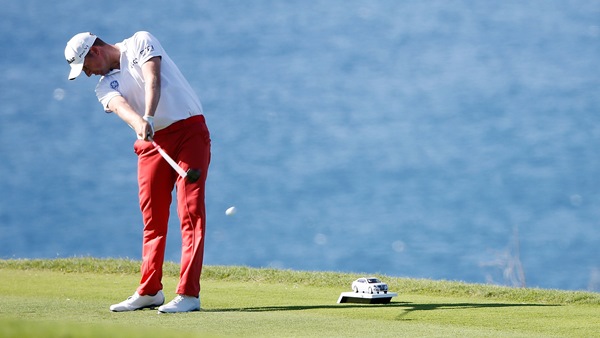 KAPALUA, Hawaii – Webb Simpson wanted to give his caddie some good news from the golf course Sunday. He delivered a 5-under 68 that gave Simpson a three-way tie for the lead with defending champion Dustin Johnson and Jordan Spieth going into the final round of the Tournament of Champions.

On a glorious day of sun and surf, Simpson played with a heavy heart.

His caddie and friend, Paul Tesori, was in a hospital in Florida with newborn son Isaiah in intensive care. Simpson said the child suffered a seizure short after he was born with indications of an infection in his brain.

One of Tesori’s best friends in the business is Ted Scott, the caddie for Bubba Watson, who is filling in this week as Simpson’s caddie. Tesori tweeted that he tuned into the telecast at Kapalua in time to see his son’s name on Scott’s hat.

“Paul sent me a text this morning, just told me he loved me and wanted to go out and fight as hard as I would any other day,” Simpson said. “And that’s what Teddy and I did. I felt like we were out there playing for Isaiah. Paul needs something to watch there in the hospital. It’s been a long few days, so hopefully, we gave him something good to see on TV. But it was tough. I was thinking about him a lot out there.”

Winning on Monday won’t be easy.

Simpson ran off four birdies in a five-hole stretch on the back nine, and then hung on with two good pars to reach 14-under 205.

Spieth, the 20-year-old Texan who looks just as good as he did during a sensational rookie season, got back into the mix with a tough birdie on the par-3 eighth and capped off a 69 with a 15-foot birdie putt on the 17th and a long two-putt for par on the 18th.

Spieth won the John Deere Classic last year. This is his first time with at least a share of the 54-hole lead.

The most intimidating figure is Johnson, whose power is suited for the Plantation Course. Johnson also had a 69 and was disappointed at playing the par 5s in 3-under for the day. One of them was a tap-in eagle on the par-5 ninth. But he had to settle for pars on the long holes on the back nine.

One shot hit the front of the green and rolled off the putting surface on the 15th and into a valley. On the 18th, his 4-iron came up short and left him a pitch that had to be perfect. It was a few inches from that. The pitch didn’t have enough roll to glide with the grain and left him a 15-foot birdie chance that he missed.

No matter. He’s still tied for the lead, still in good position to start the new year the same way he did in 2013.

Zach Johnson, who had a three-shot lead going into the third round, couldn’t make anything and shot a 74. His only birdie was a two-putt on the par-5 fifth hole. Still, he was only two shots behind at 12-under 207 heading into the Monday finish.

Instead of building his lead, Zach Johnson effectively gave more players in this winners-only field a chance.

Gary Woodland (67), PGA champion Jason Dufner (69), Brandt Snedeker (69) and Kevin Streelman, who had a 33 on the back nine to salvage a 70, were within three shots of the lead. Masters champion Adam Scott wasted a chance to join them.

Scott was at 11-under and in range of the par-5 15th until he smothered a long iron into the hazard and had to scramble for a bogey. He missed a 7-foot birdie putt on the next hole, missed the green and took bogey on the 17th and closed with a birdie for a 69. He still was only four shots behind.