Spieth opens the new year in style with win at Kapalua 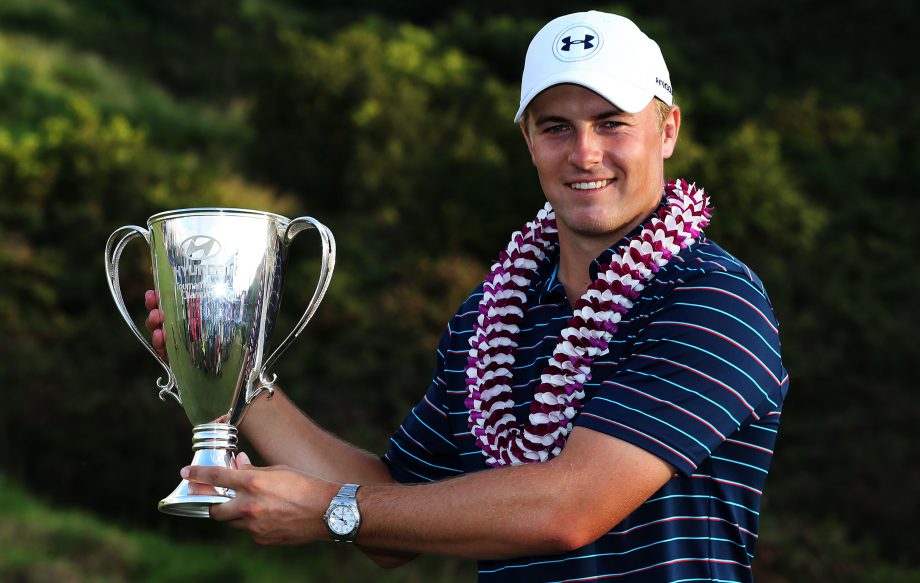 KAPALUA, Hawaii – Jordan Spieth brought his old form to the new year and had no trouble winning the Hyundai Tournament of Champions on Sunday.

Staked to a five-shot lead, Spieth made two straight birdies around the turn at Kapalua to restore his margin, and he spent the rest of the afternoon soaking up the views of surf and sun on Maui. The view from the top is just as stunning at the moment, not so much for those trying to catch him.

Spieth made an 8-foot birdie putt to reach his target, even though he didn’t need it. He closed with a 6-under 67 for an eight-shot victory over Patrick Reed. He finished at 30-under 262, joining Ernie Els as the only players in PGA Tour history to finish a 72-hole event at 30 under or lower.

“I felt like it was short three-week break and continue what we were doing last year,” said Spieth, coming off a five-win season that included the Masters and U.S. Open. “That’s the way I’ll keep on thinking about it. It worked this week. All parts were firing.”

Reed, the defending champion at Kapalua, got within three shots with a birdie on the par-5 ninth. Spieth answered with a two-putt birdie in the group behind him, and then rolled in a 15-foot birdie putt on the 10th and was on his way.

He had talked about setting 30 under as his goal because it such gorgeous conditions, he might need it to hold off anyone making a big run.

Turns out he didn’t need it.

Reed stalled on the back nine, ended his bogey-free week on the 15th hole and closed with a 69. Brooks Koepka, playing with Spieth in the final group, had a wild start to his round but never got closer than the five-shot deficit he faced at the start. Koepka closed with a 71 and tied for third with Brandt Snedeker (67).

Spieth won for the seventh time on the PGA Tour, joining Tiger Woods as the only players to get that many at age 22 since complete records began in 1970.

That requires a little context.

Even so, comparisons with Woods in golf can only mean great play, and no one is playing better.

“Nowhere near,” Spieth said on how his record stacks up with Woods. “I don’t think there’s any reason to compare. It’s awfully early. We’re excited about where we’re at to start our career. What Tiger has done, I can’t imagine ever being done. But it’s nice to be in that company. It’s fantastic being out here with what we’re trying to do, and doing it well.”

It was the fifth time in the last 13 months that Spieth had at least a two-shot lead going into the final round, and he was never seriously challenged. That’s not to suggest it felt like a breeze, especially early. His approach shot on No. 1 somehow ended up just out of a steep bunker on the very edge of sand, some 50 yards to the hole. He pitched it onto the green and let the grain take it to 4 feet for a save, and then he holed a 35-foot birdie putt on the next hole.

But he missed a 3 1/2-foot birdie putt on No. 3, and then three-putted the par-5 fifth for a par. And after a simple up-and-down for birdie at No. 6, he made his second bogey of the week on the par-3 eighth hole. Reed made birdie on the ninth ahead of him, cutting the lead to three shots.

That was as close as it got.

Reed, trying to join Stuart Appleby and Geoff Ogilvy as the only repeat winners at Kapalua, opened with three birdies in five holes and went out in 32. Whatever chance he had ended when he started the back nine with five straight pars. A poor drive on the par-5 15th led to his only bogey of the week.

“I knew I had to make birdies early to put pressure on him,” Reed said. “I got it to within three. The next time I saw a board it was back to five. He’s not going to shoot over par, especially the way he’s playing now.”

The tournament was never in doubt, and for one tournament at least, Spieth backed up his comment that 2016 isn’t an encore because that would mean the show was over.

The next questions is how good he can get.

After a week at home in Dallas, he heads to Middle East for the HSBC Abu Dhabi Golf Championship and the Singapore Open before resuming his PGA Tour schedule at Pebble Beach and Riviera.

Much like Woods in 2000, and even David Duval in 1999, he sent an early message by winning Kapalua that he wasn’t interested in this wave to end.