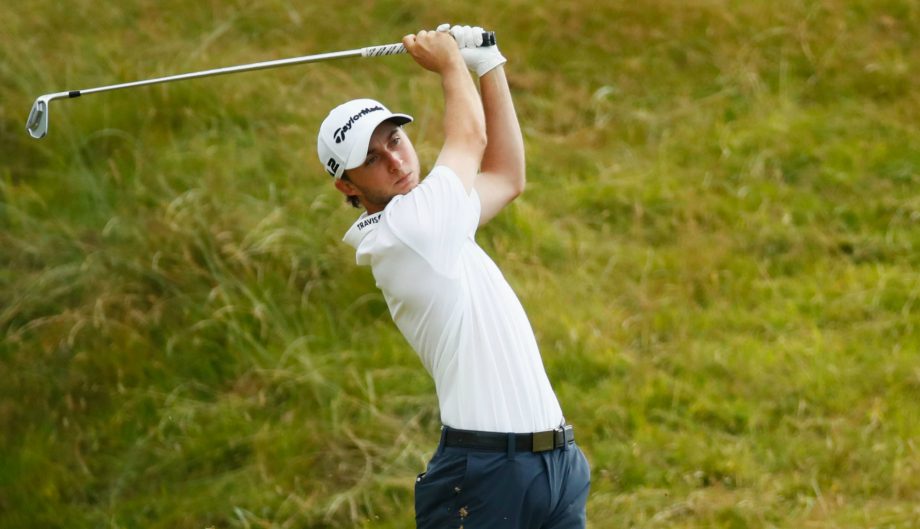 Jordan Spieth is one round away from the third leg of the career Grand Slam, and one year removed from a reminder that it won’t be easy.

On the horizon is a chance to join Jack Nicklaus as the only players to win three different majors at age 23. In the past was his last time leading a major, when he let a five-shot lead get away from him on the back nine a year ago at Augusta National.

All that mattered to him was the present.

Spieth did his part on an extraordinary day of scoring in the British Open, capping off his 5-under 65 by seizing on a good break and making a 20-foot birdie putt on the 18th hole for a three-shot lead over Matt Kuchar, who did his best to keep pace with a 66.

Catch up with all of the action from a record breaking day at Royal Birkdale. #TheOpen pic.twitter.com/rD5g73y1g7

Spieth had one of seven rounds at 65 or lower at Royal Birkdale, which was never more vulnerable with a light breeze and a clear sky until the final hour. He was warming up on the range when Branden Grace shot 62, the lowest 18-hole score over 157 years of major championships. Spieth then delivered his second bogey-free round of the week in which he never came seriously close to a bogey.

“Pretty stress-free,” Spieth said. “On a Saturday with a lead in a major, that’s as good as I can ask for.”

He was at 11-under 199, breaking by six shots the 54-hole record at Royal Birkdale that Tom Watson set in 1983. Not only did that last birdie give him a three-shot lead, no one else was closer than six shots.

This will be Spieth’s third time taking the lead into the final round of a major. He led by four at the Masters two years ago and won by that margin. More recent was a one-shot lead at Augusta to start the final round, a five-shot lead at the turn and a quadruple-bogey on the 12th hole that cost him another green jacket.

Spieth was embracing both memories.

“I think I’m in a position where it can be very advantageous, just everything I’ve gone through – the good, the bad and everything in the middle,” he said. “I understand that leads can be squandered quickly. And I also understand how you can keep on rolling on one.”

He described the Masters last year as a humbling experience that he thought would serve him well down the road.

Kuchar never quite caught up to Spieth. He twice made birdies that momentarily tied him for the lead, only for Spieth to pour in birdie putts on top of him to stay in front. Kuchar’s one slip was a drive into the pot bunker on No. 16 when the rain finally arrived, and a three-putt that led to double bogey.

He will be playing in the final group of the fourth round at a major for the first time, and the 39-year-old Kuchar sounded up for the occasion.

The scorecard of @BrandenGrace's historic 62 from Round 3 of #TheOpen. pic.twitter.com/FdI0bBjnDp

“Look at that number! That is sweet,” Johnny Miller, now a golf analyst, said as NBC flashed a 62 on the screen. Miller was the first to shoot 63 in a major at the 1973 U.S. Open at Oakmont. It took 44 years for someone to top it.

Spieth and Kuchar lit it up, too. They combined for 12 birdies, such impressive golf that Kuchar said a couple of times they forgot who had honours on the tee box. Along the way, they created a little separation from the rest of the field.

Austin Connelly, a dual Canadian-American citizen who grew up in Dallas and shares a swing coach with Spieth, extended his remarkable run with birdies on his last two holes for a 66. The 20-year-old who plays under the Canadian flag was six shots behind at 5-under 205, tied with U.S. Open champion Brooks Koepka, who had a 68.

A phenomenal performance so far from 20 year old @Austinconnelly9 who goes into Round 4 joint third at -5. pic.twitter.com/xT0yAKX4kU

Grace wound up seven shots behind even after his 62.

Missing from the mix was Rory McIlroy, who looked to be a big threat when he began with three birdies in five holes, driving the green on the shortened par-4 fifth hole. He lost it around the turn, making back-to-back bogeys, and then a double bogey at No. 10 when he blasted out of one pot bunker left of the fairway and it spun toward another, resting in the thick collar.

McIlroy had a 69, rarely a bad score in the third round of a major. This one left him nine shots behind.

“If you keep it in play, it’s almost hard to make a bogey out there, you know?” McIlroy said. “I’ve always been good when I get off to fast starts, being able to keep it going, and I didn’t today. And I needed to – that’s the disappointing thing.”

Ian Poulter felt even worse. Still lurking, he ran off three straight bogeys early on the back nine and shot 71 to fall nine back.

What a day of golf at @RoyalBirkdale_. See you tomorrow for the grandstand finish. #TheOpen pic.twitter.com/ozKgeJTOKN

The tone for Sunday was set over the final three holes, when Kuchar made his double bogey. Kuchar got one back with a birdie from the pot bunker short of the green at the par-5 17th. And then Spieth stole a birdie at the end when his approach narrowly missed the bunker right of the green and had enough spin to stay on the putting surface for his final birdie. Kuchar missed his birdie attempt from 12 feet.

“I played well today,” Kuchar said. “Certainly, I’m not out of it. I’m playing some good golf. I’m very excited for tomorrow.”

Both took time to stop and soak in the best walk in golf, a full grandstand surrounding both sides of the 18th. Kuchar stopped and said to Spieth, “This is pretty cool to be here, walking up the last hole of a British Open.”

They get to do it again Sunday, with a lot more at stake than warm applause.