Spieth and Walker tied for lead at Pebble Beach 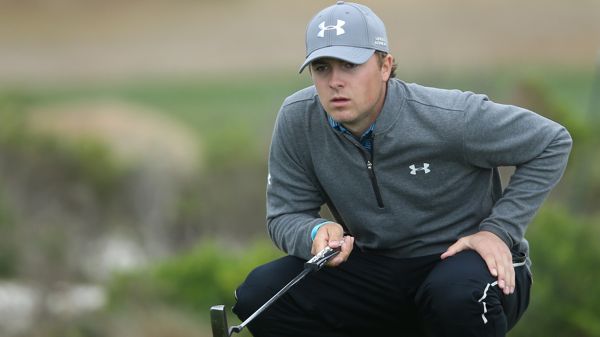 PEBBLE BEACH, Calif.  — The wind and the rain arrived Friday, perhaps a prelude to a nasty weekend. Leave it to a pair of Texans – Jimmy Walker and Jordan Spieth – to thrive in Crosby Clambake conditions at the AT&T Pebble Beach National Pro-Am.

Walker made some tough par saves and wound up bogey-free at Spyglass Hill with a 3-under 69. Spieth was down the coast at Monterey Peninsula, where he called the birdie on his final hole the best of his life. He’s only 20, but it was a proud moment.

They were tied for the lead going into the third round, one shot to par ahead of Hunter Mahan.

The slight advantage would go to Walker, who was at 9-under 135. Already a two-time winner this season, Walker next goes over to Monterey Peninsula, the easiest of the three courses in the rotation. Spieth was at 9-under 134 and headed to Pebble Beach, which can be brutal in nasty weather.

And the forecast for Saturday was not particularly pleasant.

Along with a three-club wind on the exposed sections of all three courses, steady rain began coming down sideways toward the end of the second round. There was about a 75 percent chance for more rain Saturday.

More than looking ahead, Spieth was looking behind. He was happy to at least get Spyglass out of the way already, having opened with a 67 on Thursday. That didn’t make the Shore Course at Monterey Peninsula a picnic.

“Today was very difficult,” Spieth said. “We started out in the rain and wind, and we finished in rainier and windier,” he said.

Spieth caught Walker for a share of the lead on the 187-yard ninth hole, which typically requires a 6-iron. He watched Kevin Chappell hit first with a 3-iron, and the ball rolled back down off the front of the green. Spieth doesn’t carry a 3-iron.

“I went to a hybrid,” he said. “And I just kind of hit a little stinger cut about 20 feet away. And then it was normally a straight putt and Michael (Greller) and I, my caddie, are looking at each other saying, `Well, we’ve got to play this about a foot out to the right with the wind.’ And so I hit it a foot out. With about 3 feet to go, the wind just blew it right, just broke perfectly right into the hole.”

Walker’s best holes were his pars, particularly the par-5 14th. His 8-iron came back down into a bunker, leaving him such an awkward lie that he had to plant his feet outside the sand. With a shallow swing, he did well to blast out 12 feet away, and he made the par putt.

“That was pretty big to keep it feeling like things were still in my favor,” Walker said.

He made two long birdie putts, and then hit a drive of nearly 390 yards on the seventh hole – with the aid of a cart path. It left him only an 8-iron to the green, and he had an easy up-and-down for his final birdie.

“Coming up these last few holes are tough,” Mahan said. “They’re uphill, they got the wind, it’s getting cold, raining. You just don’t want to throw away shots. Because this can be a long week, and it could be mentally more grinding than anything.”

Andrew Loupe, who has missed every cut in his rookie season so far, followed his 63 at Monterey Peninsula with a 73 at Pebble Beach. That wasn’t too bad, for Pebble Beach was playing to an average of 74.1, about 2 1/2 strokes more difficult than Thursday. He was at 7-under 136 and plays Spyglass on Saturday.

Phil Mickelson finished off his 66 at Monterey on Friday morning, and then got an early indication at Pebble Beach that this might be a long day. He three-putted from 5 feet above the hole on the par-5 second for a double bogey. Mickelson holed some good birdies, but missed plenty of short ones. He switched from a conventional grip to the claw during his round, searching for answers. A three-putt bogey on the 18th at Pebble gave him a 73. He was at 4-under 139, still very much in the game.

“Tee to green, I’m playing very well, but I haven’t putted this poorly in a year,” he said. “For the way I’m hitting it, it’s a little disappointing because I should have a really good opportunity. And I’ll have to turn it around. It’s not too late, but I’ve got to get it turned around here.”

This is his last tournament until the Florida swing.

David Duval showed some promise in his first PGA Tour event of the year with a 68 at Spyglass, a course that traditionally gives him fits. He was at 4-under 140.

“What’s the forecast tomorrow? More of this? Cool,” Mickelson said with a deadpan delivery. “We’ve had a great run of weather … so we certainly can’t complain. It’s sometimes a fun challenge to play out here as the reigning Scottish and British Open champion. I don’t really mind the elements, but I do have to get this putter worked out.”

It already was a challenge for so many others. John Daly shot 79 at Monterey Peninsula. Four players failed to break 80. Two-time champion Dustin Johnson fell back with a 73 at Monterey. Jason Day of Australia shot 77 at Pebble Beach with one birdie.