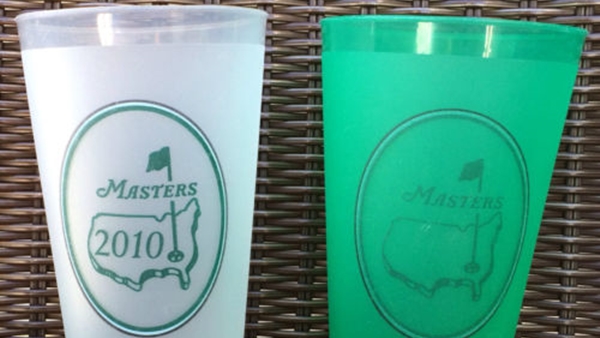 AUGUSTA, Ga. – On the course, it’s all about going low. Outside the ropes, it’s more about stacking high.

Masters cups are among the most sought-after souvenirs at Augusta National. Fans buy drinks – beers are a modest $3 – empty the logo-etched cups and start stacking them high. Really high. Others even dig through trash cans to get extras.

One fan was spotted with 16 of them piled up Saturday.

“We’re trying to get 50 cups between us,” said the fan, Mike Fletcher, who is attending his ninth Masters with his girlfriend and some friends.

Fletcher says they make great cups to use around the pool. They’re a conversation piece, too. After all, there’s only one place and one time of the year you can get those keepsakes.

Official Masters souvenirs and apparel are only during the event’s eight days, which explains why the gift shops are packed all day, every day during the tournament.

Those Masters-green golf chairs seen all around Augusta National cost $45. A Masters umbrella goes for $30. Shirts range in price, but many sell for more than $100.

It’s a booming business for sure. But lines are hardly an issue because there are workers everywhere, so many that the shops have one person to tally merchandise and another to bag it.

Of course, if you aren’t at Augusta, you can always try your luck picking up Masters apparel on eBay. But be prepared to pay a premium.

Those drink cups that come with drinks being served at Augusta are selling for various prices on the online auction site. But expect to pay in the range of $5-$10 per cup, excluding taxes.

The TV ratings continue to be down at the Masters, where Tiger Woods is absent for the first time in 20 years.

Over two days, the rating is down 36 percent.

“While viewership was down this year, the Masters has a value to us that goes well beyond ratings,” said John Wildhack, the executive vice president of production and programming for ESPN.