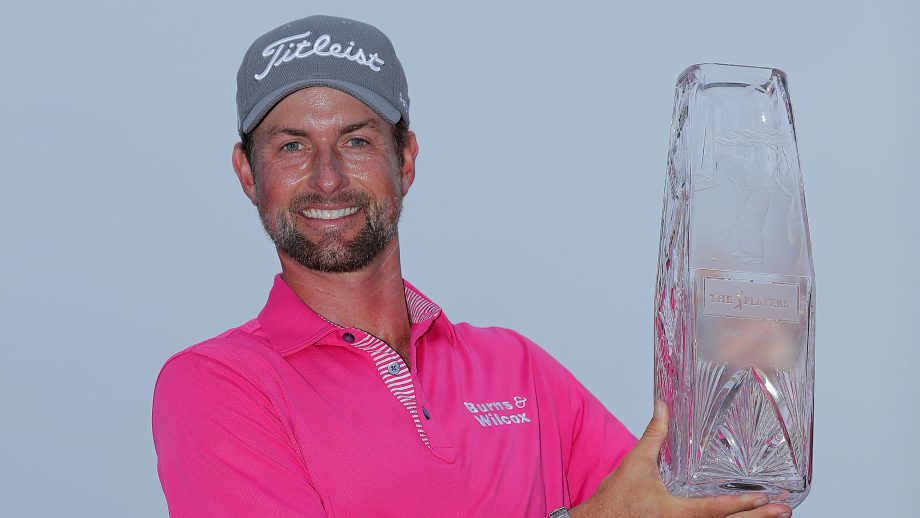 PONTE VEDRA BEACH, Fla. – Starting with the largest Sunday lead ever at The Players Championship was harder than Webb Simpson imagined. Hearing one big roar after another from Tiger Woods playing four groups ahead of him didn’t help. Through it all, Simpson managed his game and his nerves.

Only when he had the crystal trophy did he start to crack.

He looked out at his wife, Dowd, a big supporter during the past few years of frustration as Simpson coped with the ban on the anchored putting stroke he used to make two Ryder Cup teams and win the U.S. Open.

And he thought about his mother at home in North Carolina, her first Mother’s Day since Simpson’s father died in November.

“It’s been a tough few months for my mom, my brothers and sisters,” Simpson said as his voice began to crack. “This is a little beacon of light for my mom, to get this done on Mother’s Day.”

There was never any doubt.

Simpson navigated his way through a few mistakes, but not too much stress in his four-shot victory Sunday at the TPC Sawgrass. Staked to a seven-shot lead, no one got closer than four shots, even after Simpson made double bogey on the 18th hole when his only remaining task was to finish the hole. He closed with a 1-over 73 to end more than four years without winning.

Woods made another big run that revved up the crowd and revived hopes that he was close to winning. So did Jason Dufner, Jimmy Walker and Danny Lee. None could do enough to catch Simpson during a week of low scoring at the final Players Championship in May. Adam Hadwin of Abbotsford, B.C., and Mackenzie Hughes of Dundas, Ont., finished tied for 57th.

“It was harder than I thought,” Simpson said. “There’s so much noise in front of us with Tiger, and you wonder what everybody is doing.”

The key moment for Simpson was hitting just short of the green on the par-5 11th to set up a two-putt birdie, and then finding the island green on the 17th when he had a six-shot lead.

“Once I got to 17 and the ball was on the green,” he said, “internally I was celebrating.”

Justin Thomas left the TPC Sawgrass as the No. 1 player in the world. He closed with a 66 to tie for 11th, more than enough to end Dustin Johnson’s 15-month reign at the top of the ranking. Thomas is the 21st player to reach No. 1 since the ranking began in 1986, and the seventh American.

“I’m very proud to have gotten there, but it means more to me how long I can hold it,” Thomas said in a text message.

Jimmy Walker closed with a bogey-free 67 and tied for second with Charl Schwartzel and Xander Schauffele, who also shot 67s. Walker, who struggled all of last year with Lyme disease, had his best finish since he won the 2016 PGA Championship.

Woods made the cut on the number – helped by Thomas and Jordan Spieth making bogey on the 18th hole Friday – got back to the first page of the leaderboard with a 65 on Saturday and ran off six birdies through 12 holes in the final round. He was tied for second at one point, still four shots behind, but that was as close he got. Woods made a soft bogey on the 14th hole when he missed the green with a sand wedge, and was well short of the island green in making double bogey on No. 17.

“I hit the ball better today than I did yesterday, and I obviously didn’t end up with the score I needed to,” Woods said.

The final edition of May was one for the record books. Simpson tied the course record with a 63 in the second round when he seized control – even with a double bogey from the water on the 17th – and he tied Greg Norman’s 54-hole record from 1994 at 19-under 197. Simpson set a record for the largest margin through three rounds. Brooks Koepka became the eighth player with a 63 on Sunday, making an albatross 2 on the par-5 16th.

But this ultimately was all about Simpson, who had missed the cut in four of his previous eight appearances at the TPC Sawgrass and had gone 107 starts on the PGA Tour since his most recent victory in Las Vegas toward the end of 2013.

He had struggled with the ban on the anchored stroke he used for his belly putter. He finally settled on a longer handle that ran up the left side of his arm, and then Tim Clark gave him the missing link. It was at The Players a year ago when Clark suggested he also use a claw grip, and Simpson had been working his way back to golf he expects to play.

“It’s pretty special that a year later, I got this victory,” he said.

Simpson won for the fifth time and moves to No. 20 in the world. He won $1.98 million, the second-largest tournament payoff behind only the U.S. Open.

The rest of the tournament would have been plenty exciting had Simpson decided to call in sick for work this week. At one point, Dufner made a birdie to break out of a 10-way tie for third place.

“I feel like all of us were just trying to make as many birdies as possible while he was trying to run away from everyone else,” Schauffele said. “So it was an interesting week.”

Canadians Adam Hadwin and Mackenzie Hughes both finished T57 with 4-under.