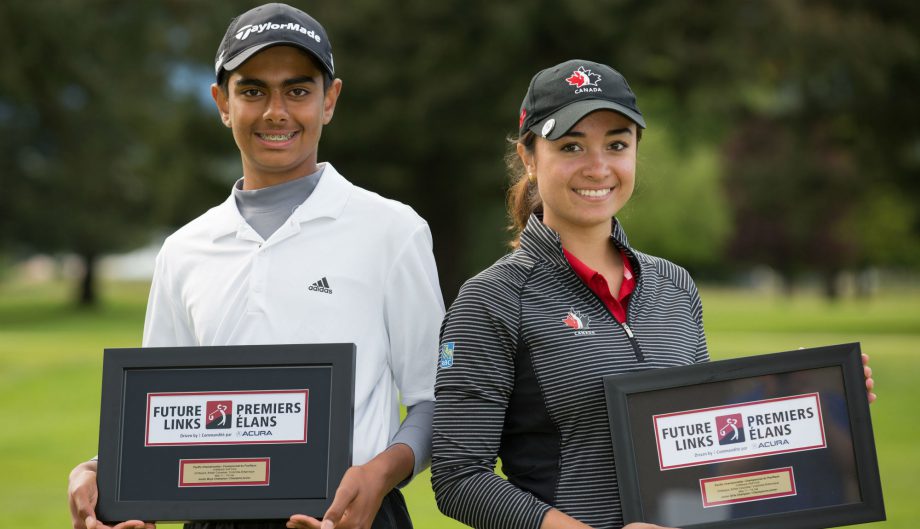 Jeevan Sihota scored a final round 67 to top the leaderboard of the Boys Division of the Future Links, driven by Acura Pacific Championship, while Mary Parsons defended her 2016 Girls Division title after she defeated Euna Han in playoff at Chilliwack Golf Club in Chilliwack, B.C. on Sunday.

Sihota, a Victoria resident, started his final round 1-over through three holes before he turned up his game scoring birdies on holes five and four. After he made the turn, the 13-year-old was lights out, playing bogey free and making birdies on 11, 12, 13 and 15, leading to a 10-under finish for the tournament.

Chandler McDowell, a Team Canada Development Squad member, started Sunday in the lead, but after bogeys on two of the first three holes, he was never able to fully recover. He finished 8-under on the tournament after his even-par final round to finish alone in fourth.

Keaton Gudz, from Victoria, and Red Deer’s Carter Graf secured the final two exemptions to the 2017 Canadian Junior Boys Championship on July 31-Aug. 3 at Cataraqui Golf and Country Club in Kingston, Ont. Gudz shot 4-under on Sunday and finished in solo-fifth while Graf shot 3-under and edged out Aidan Goodfellow in playoff for the final spot.

In the Girls Division, Parsons started the day sitting in fourth place but she managed to drop three birdies before she made the turn to put her into striking distance of the top of the leaderboard. Heading into hole 17, the Delta B.C., product was sitting at 3-under and then went birdie-birdie to close out the round with sole possession of first place.

Han, who remained at the top of the leaderboard through the first two rounds, struggled to get things going and headed to the 18th hole 2-over, but managed to nail a clutch birdie putt to force a playoff with Parsons.

Phoebe Yue, of West Vancouver, recorded the low-score of the tournament (and ladies course record) for the Girls Division with a 7-under 65. She recorded two eagles in her final round, including one on the par-4 eighth hole from 140 yards out. Her stellar final round pushed her to 3-under on the tournament and into a tie for third with Surrey’s Susan Xiao.

Xiao, who started in the final pairing, got off to a slow start with a bogey on holes one and three before finishing +1 on the day.

Katherine Chan and Tiffany Kong shot 2-over and 1-over to round out the top-six who earn exemptions into the 2017 Canadian Junior Girls Championship on Aug. 1-4 at Camelot Golf & Country Club in Cumberland, Ont.

Team Canada Development Squad members Monet Chun (T7) and Hannah Lee (10) both got off to rocky starts
and scored 3-over and 5-over respectively.