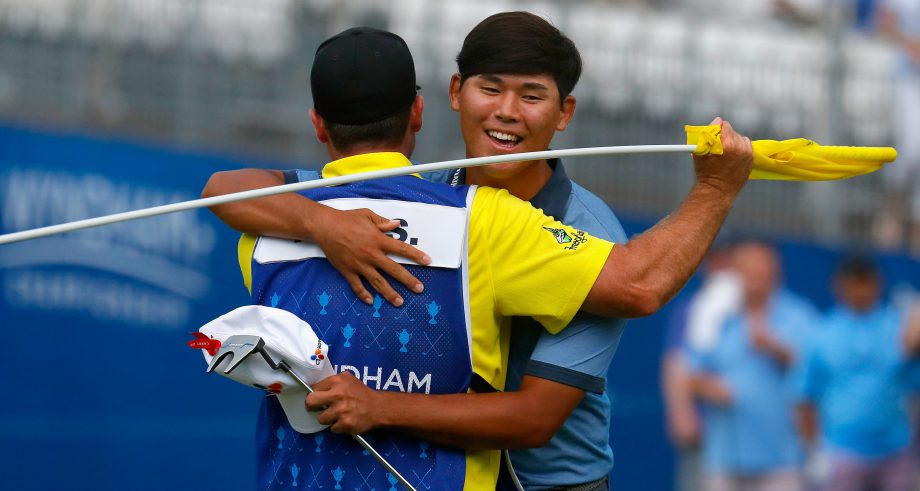 The 21-year-old South Korean player closed with a 3-under 67 to finish at 21-under 259 at Sedgefield Country Club, tying the tournament 72-hole record set eight years ago by Carl Pettersson.

Kim set a tournament record with a 60 in the second round. He earned 500 FedEx Cup points and $1,008,000 in prize money in the regular-season finale.

Luke Donald was second at 16 under after a 67. Hideki Matsuyama and Brandt Snedeker were 15 under, also each shooting 67.

Kim pretty much locked up the tournament on the par-5 15th.

Donald birdied that hole to pull within three strokes of Kim at 16 under, and Rafa Cabrera Bello – Kim’s playing partner – joined him by chipping in for eagle from a greenside bunker on that hole.

Kim then pushed a 15-foot eagle putt to the right of the hole, but tapped in a 4-footer for the birdie that put him back up by four strokes with three holes left.

With only six players left on the course and the final pairing headed to the 17th tee, play was suspended for 1 hour, 21 minutes as thunderstorms passed through.

That only meant Kim had to wait a little while longer for his victory party.

He vaulted to the top of the leaderboard Friday with his record round – he missed a 50-foot putt on his final hole for 59 – then stayed there Saturday with a 64 that put him up by four strokes entering the final day.

He’d come close to a win once before, losing to Aaron Baddeley in a playoff last month in Alabama in the Barbasol Championship.

It looked as if Kim would cruise in this one after he had four birdies on his front nine, including two in a row on Nos. 8-9 to move to 22 under and put him on pace for the record. When he made the turn, nobody was within six strokes of him.

But things briefly got tense on the back nine: Kim lost a stroke on the 10th after missing a 4-foot par putt in a driving rain, then gave two more back with bogeys on Nos. 13-14 to slip to 19 under.

“You had to play a perfect round of golf” to catch Kim, Snedeker said. “If he did what he has been doing all week, he’s really, really tough to catch.”

The dominant subplot each year at the Wyndham – the tour’s regular-season finale – is the push by the bubble players to crack the top 125 in the FedEx Cup standings and qualify for The Barclays next week at Bethpage Black.

While Kim – who came to Greensboro at No. 43 on the points list – didn’t need any help, others certainly did.

Whee Kim, a South Korean player who arrived at No. 125, and No. 124 Matt Jones both slipped out of the playoff field after missing the cut.

Kyle Stanley and Shawn Stefani both finished 12 under – good enough to put them both in The Barclays. Stanley arrived at No. 127 while Stefani started at No. 133.

“I knew I had to come in here and have a good week,” Stefani said. “Just been a whirlwind of emotions this week and I’ve really felt good about my game and really love the direction my game is headed.”