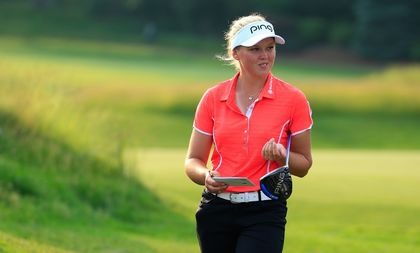 Shin eventually caught her, shooting a bogey-free, 7-under 66 Thursday for a one-stroke lead after the opening round at the KPMG Women’s PGA Championship, the second major of the season.

“I was chasing the leaderboard all day, and I was surprised that Webby was at 6 under at one point,” said the 22-year-old Shin. “I got there and was like `Maybe I can get one more on the 18th hole,’ and I did.”

Canadian teenager Brooke Henderson had a three-putt bogey on her final hole at the ninth to drop a shot back after Shin birdied No. 18 at the Westchester Country Club.

“I hit it well all day, I’m disappointed with the finish on the last hole,” said the 17-year-old Henderson, who was playing on a sponsor exemption.

Webb birdied three of the first four holes and finished at 68. The 40-year-old Webb started her round in hazy conditions at No. 10 and shot a 4-under 33 on the opening nine. She had a bogey-free round until she dropped a shot on the seventh when she missed the fairway left and hit the front bunker.

“I hit a wedge to a foot and a half on 10 and that settled me in,” Webb said. “Hit the green in two on 12 and had about a 15-footer for eagle. I really put some very solid swings on it early on.”

Shin had five birdies and an eagle on the par-5 15th. She spoke to her sports psychologist on Wednesday night to help calm her nerves.

“I was freaking out for this round, so I tried to play as comfortable as I can, just like any other tournament,” Shin said. “I tried not to think of it as a major and it turned out great. I had a couple of bogey-free rounds last week, so I think I’m on a good run.”

Americans Brittany Lincicome, Lexi Thompson, Cristie Kerr and Stacy Lewis were in a large group that finished four strokes back at 70 in steamy temperatures that reached the mid-80s. Lincicome, the winner of the first major at the ANA Inspiration in April, eagled the par-5 15th and followed with a birdie on 16.

Two-time defending champion Inbee Park shot a 71. Top-ranked teenager Lydia Ko was another stroke back, and Suzann Pettersen, coming off a win in Canada, finished at 74. Michelle Wie, bothered by a hip injury, shot 75.

Shin, who is seeking her first major, had three birdies on the front nine to gain on Webb, a seven-time major winner.

Henderson, who turned pro in December, is below the LPGA Tour’s age requirement of 18. But she made the most of her sponsor exemption.

Then came the three-putt on her final hole, where she “tried to hit it a little too hard and had an 8-footer to save par.”

“The putt, if I hadn’t hit the hole, it probably would have gone off the green,” she said. “(My caddie) asked if I had dented the cup.”

Park finished with a birdie on 18, one of five on the day along with a bogey. The South Korean has won five majors, including three straight in 2013.

Kerr had a bogey on the par-5, 551-yard fifth hole and four birdies on the West Course that she often plays when in New York. She’s familiar with the sloping greens at the longtime home of the PGA Tour event now called The Barclays.

“The front nine, I had a bunch of chances and a couple putts lipped out,” Kerr said. “I just tried to stay patient and got off to a great start on the back nine.”

Alena Sharp carded a 1-under 72, while fellow Canadians Sue Kim and Rebecca Lee-Bentham both posted rounds of 78.

BIRDIES: Annika Sorenstam, a winner of 10 majors and three Women PGA Championships, said she walked the course. “It’s a tough course, the greens and some blind holes where you really have to commit yourself. The scores are not that low, not many birdies. It will be a typical grinder week.” … Lincicome ran into Triple Crown-winning jockey Victor Espinoza at the Mets game on Tuesday night and got a picture with him. … Playing with Kerr and Jessica Korda, Lincicome bet $5 for every birdie after a slow start. “Korda birdied the last, so we were tied, unfortunately,” Lincicome said. “We just kind of needed something to motivate us to get back in it. We didn’t let Kerr in because she was already making too many.”