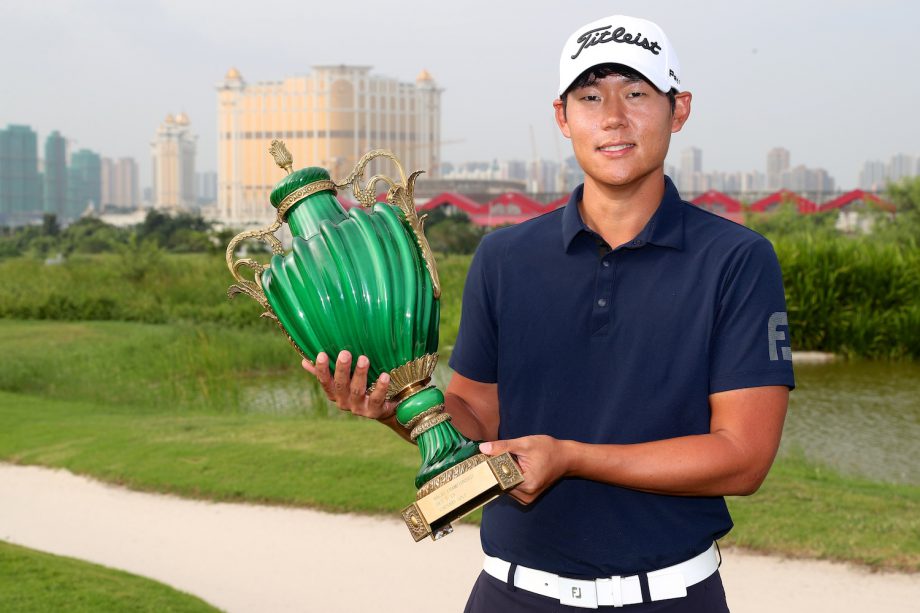 He is one of four Canadians to win on this Tour, joining Eugene Wong, Peter Campbell and Richard Jung, also a two-time winner.

‪Congrats to Justin Shin on winning the season-ending Macau Championship in flawless fashion with rounds of 63-62-66-68 for a -25 total! ??? ‬

Starting the day six strokes clear of China’s Zecheng Dou after opening rounds of 63-62-66, Shin continued his flawless play to card a 3-under 68 Sunday. He finished at 25-under, good for a five-stroke victory at Caesars Golf Macau. Dou, who won the 2016 Order of Merit and is a member of the Korn Ferry Tour, came to within three strokes of Shin after 12 holes but failed to close the large gap despite shooting a 65 to take solo second.

American Max McGreevy tied for 41st, which was still more than enough to secure Player of the Year Honors over compatriot Trevor Sluman, who missed the cut this week. McGreevy, who had nine top-10s and a victory this season, will have full playing rights for the 2020 Korn Ferry Tour season. American David Kocher finished third on the money list, while France’s Cyril Bouniol and South Korea’s Luke Kwon finished fourth and fifth to also secure Korn Ferry Tour membership.

Jung shot a 67 to secure third place, at 19-under, two shots ahead of Bouniol. Kwon tied for fifth, at 16-under, along with Thailand’s Suteepat Prateeptienchai, American Shotaro Ban and Australia’s Aaron Wilkin. Jung finished sixth on the Order of Merit, a performance that will allow him to skip the second stage of Korn Ferry Tour Qualifying Tournament and advance to the final stage, set for mid-December outside Orlando, Fla.

Meanwhile, Shin was flawless all week, carding 24 birdies and two eagles against only three bogeys. He improved to No. 11 on the Order of Merit, just missing the top 10. He will be fully exempt on the 2020 PGA TOUR Series-China

“I just really wanted to have a second win here in China. My last one was in 2015, and I wanted to win so badly right away but it didn’t happen until now,” said Shin. “So, I’m just really glad I did, and I hope to get more wins out there now.”

Shin, who played a full season on the Korn Ferry Tour in 2017, had been struggling with his game in China. He came into this week ranked 67th on the Order of Merit and in danger of losing his Tour card for next season. However, a putter change last month followed by two good results on the Korean Tour obviously helped Shin regain his confidence.

That showed all week and again Sunday as he stayed calm and recorded three birdies in a bogey-free round despite feeling pressure from playing partner Dou.

“I knew I needed to keep playing aggressive because I knew Dou could make a lot of birdies, and he did. On the first nine he was 3-under, and he was catching,” said Shin. “I was struggling to make birdies and felt a lot of pressure because I knew that Dou could do a lot of crazy things. Luckily, I made a nice long putt on 12, which helped me make it through.”

At the start of the round, Dou knew that he would need Shin to fall back if he wished to close the large gap. For the 2016 PGA TOUR Series-China Player of the Year, who is back in Asia to prepare for the World Golf Championships-HSBC Champions, that didn’t happen. However, Dou was more than happy with his second-place finish, which will give him plenty of confidence heading to Shanghai and Sheshan International for the first WGC tournament of the season.

“It was a really great week. I knew it was going to be really difficult to catch Shin, and he played really well again today,” said Dou. “I’m just really happy with how I played, and I love being back in China. It feels good to play at home, and now I’m just going to keep practicing to get ready for the WGC-HSBC Champions.”

It has been 4 years, 4 months, 22 days, or 1,605 days total, between Justin Shin’s first PGA TOUR Series-China win and his victory this week at the Macau Championship? It is the longest span between victories in Series history.