Sharp pulls into tie for lead at Manulife LPGA Classic 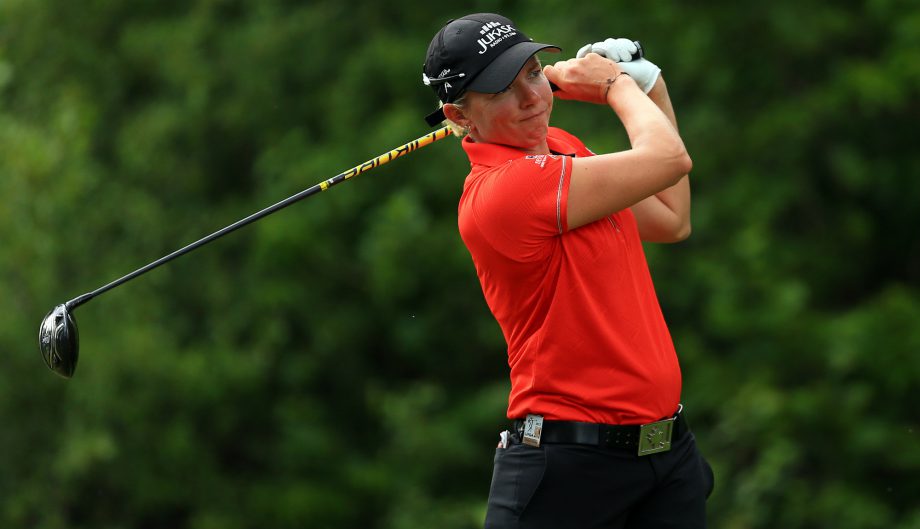 When Canada’s Alena Sharp was faced with challenges Friday at the Manulife LPGA Classic, she responded in quick fashion.

A penalty stroke and double-bogey on the third hole? Answered with a birdie on the fourth.

A headache coming on at the 11th hole? A run of three straight birdies soon followed.

Sharp refused to buckle en route to a second straight 66 at Whistle Bear Golf Club, moving her into a first-place tie with American Lexi Thompson and Hyo Joo Kim of South Korea at 12 under. Three other players were one shot off the lead at the tournament’s midway point.

“This week has been different,” Sharp said. “I just walked up to the golf course yesterday and today just feeling like it was going to be a good day.

“Just had these good vibes coming out.”

“I love playing in Canada… there’s nothing better” ??

The headache had gone away by the time Sharp signed her scorecard. Her third-hole misery didn’t last long either.

Sharp said her ball moved ever so slightly as she went to address a chip shot. While she didn’t feel she had grounded her club, she conferred with a rules official and took a one-shot penalty.

“I needed to call it on myself because I was going to be thinking about it all day,” Sharp said. “I thought I did the right thing. Went out and birdied the next hole and really just forgot about it.

“Just kept playing the way I was.”

Sharp, from Hamilton, capped her front nine with an eagle and had a run of three straight birdies on the back.

Perrine Delacour of France, American Lindy Duncan and South Korea’s In Gee Chun were tied in fourth place while China’s Shanshan Feng, Bronte Law of England and Minjee Lee of Australia were two strokes off the pace.

Canadians Brittany Marchand and Brooke Henderson were also in contention.

Marchand shot a 70 to make her first career LPGA Tour cut. The full-time Symetra Tour player from Orangeville, Ont., was five strokes off the lead at 7-under 137.

Henderson, from Smiths Falls, Ont., was six shots back after a 67. She started a run of four straight birdies on the ninth hole and played bogey-free the rest of the way.

“That was the day that I needed,” she said.

.@BrookeHenderson -“ I had good energy today & felt like I could have been better than -5”

Delacour shot a blistering 62, the lowest score at the tournament since three players shot 63 when the event moved here in 2015.

South Korea’s Inbee Park (2014) and Hee Young Park (2013) share the tournament low of 10-under-par 61. Both scores were recorded at the Grey Silo Golf Course in nearby Waterloo.

Suzann Pettersen of Norway had a 71 to move to 9-under 135 while fellow first-round co-leader Mi Hyang Lee of South Korea was a shot behind her after a 72.

Conditions were warm and breezy and preferred lies were in effect for the second straight day.

Henderson, one of the longest hitters on tour, has been crushing her drives but she struggled with the putter Thursday. She was visibly frustrated at times and didn’t speak with reporters after signing her scorecard.

Her smile – and her short game – returned Friday.

“I played really well yesterday, I hit a lot great shots, I just didn’t make any putts and my energy kind of dropped a little bit,” Henderson said. “Today I was able to get a few tap-in birdies that were only at three or four feet and that gave me a lot of confidence.

“I felt like I could make any putt out there.”

The world No. 15 has had a rather quiet season after a huge year in 2016. Henderson won her first major title last year and reached No. 2 in the world rankings, but she has just two top-10 finishes this season.