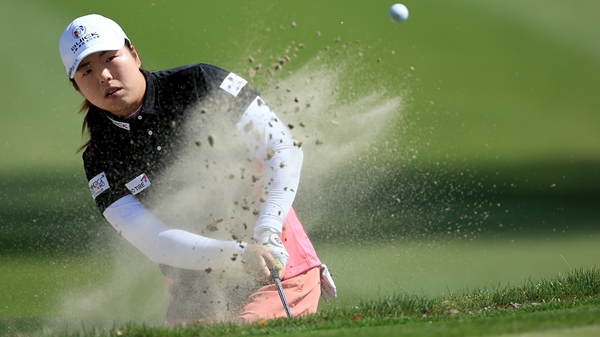 Tied for the lead after playing a four-hole stretch in 5 under, Wie lipped out a 3-foot par putt on the par-3 17th, then settled for par and a 5-under 67 after her wedge approach released long on the par-5 18th.

Feng shot a 66 in perfect morning conditions at Mission Hills in the first major championship of the year. The 24-year-old Chinese player had seven birdies and a bogey.

“This morning, it was playing easier because there was no wind,” Feng said. “The pin positions weren’t that hard. We actually had a lot of birdie chances.”

“Just a solid round,” Pak said. “The greens got a little firmer, but I got pretty good distance control.”

Angel Yin, a 15-year-old high school freshman from the Los Angeles suburb of Arcadia, was another stroke back at 68 with Amy Yang.

“I think Duncan (French, her caddie) and I did a really good job of course management,” Wie said. “Just was aggressive on the holes I needed to be and conservative on the other holes.”

“I think when you’re younger you’re kind of fearless,” Wie said. “You don’t know what failure is.”

Wie has two LPGA Tour victories, winning the 2009 Lorena Ochoa Invitational in Mexico and the 2010 Canadian Women’s Open. She has been in the top 16 in all five of her starts this year, finishing a season-best fourth in Thailand.

“I’m so grateful to have rounds like these,” Wie said.

Feng won the 2012 LPGA Championship to become the tour’s first Chinese winner and had two victories late last year. She tied for 16th last week in the Kia Classic.

“The beginning of this year I was kind of a little lost because I lost a little weight and my swing kind of changed a little,” Feng said. “I wasn’t swinging very comfortably.”

Paired with 58-year-old Hall of Famer Amy Alcott, Feng rebounded from a bogey on 15 with a birdie on par-4 16th and closed with two pars.

“She was actually encouraging me,” Feng said about Alcott. “Like I made a bogey on 15, and she was like, `OK, let’s make two birdies back in the last three holes.’ I was like, `Yes, ma’am.’ Then I only made one.”

“She was very sweet starting off and we were talkative,” Alcott said. “She hits it very solid. Just a very, very talented young player. I was very impressed with her putting and just her overall game, just how she managed herself on the golf course.”

Anna Nordqvist, the winner last week in Carlsbad for her second victory of the year, opened with a 71. Playing partner Stacy Lewis, the 2011 winner, had a 73. She struggled off the tee, hitting drives to the right.

“The good thing is I’m hitting my irons well and hitting some good putts,” Lewis said. “If I can straighten out my driver I’ll be right there.”

“I didn’t hit my driver that well,” Ko said.

Karrie Webb, also a two-time winner this year, was in the group at 73, and defending champion Inbee Park had a 74. Park is struggling with her putting after dominating on the greens last year when she swept the first three majors and won six times.

“The opportunities I had, I didn’t make the putts,” Park said.

Yin was asked if there was a player she wanted to meet, but was too shy to approach.

The 24-year-old Wie laughed when told about Yin’s response.

Sixteen-year-old Brooke Henderson of Smiths Falls, Ont. opened with a 5-over 77 and is tied for 82nd.

Rebecca Lee-Bentham of Toronto carded an 8-over 80 and is tied for 105th.