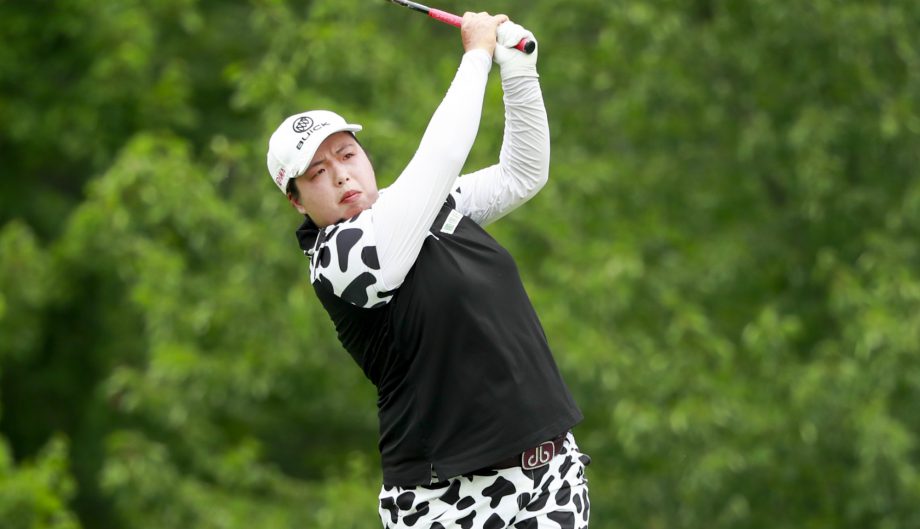 Shanshan Feng had her best round in the U.S. Women’s Open, and the first-round lead.

Afternoon rain and lightning forced officials to suspend play for more than two hours Thursday in the biggest event in women’s golf, and play was stopped because of darkness with 39 players still on the course. They will return early Friday to complete the round at Trump National Golf Course.

The weather was the only hitch for the players and the USGA, which took a lot of criticism for failing to move the $5 million event to another course after comments by President Donald Trump about women.

Despite fears of protests, Day 1 was uneventful.

There were no demonstrators. The golf was excellent and Feng was outstanding, shooting a 6-under 66 in a tournament in which she has rarely played well in her 10 seasons as a professional in the United States. It marked the first time the 27-year-old from China broke 70 in 42 Open rounds.

Amy Yang of South Korea, who has had two seconds, a third and a fourth in this event in the last five years, was a shot behind.

"I felt so comfortable out there" @shanshanfengCHN after carding a 6-under 66 at the #USWomensOpen pic.twitter.com/FpDh2D240D

Brooke Henderson of Smiths Falls, Ont., is the top Canadian with a 2-under 70. Amateur Maddie Szeryk of London, Ont., is even while Hamilton’s Alena Sharp opened with a 4-over 76.

Carlota Ciganda also was 4 under with a hole left. She would have to eagle the par-5 18th to get a share of the lead.

Former Open winner Cristie Kerr, who played with back spasms, and Megan Khang were the best U.S. finishers at 69.

Feng, who has never finished better than fourth in the Open (2012), started her round on the 10th hole and played the back side in 5 under, rolling in five birdies. She added another at No. 1 and then parred her last eight holes.

“I started the round very great,” said Feng, who lipped out on two birdie putts on her final nine. “I mean I had three birdies in the first four holes and then after that I mean I just felt so comfortable about everything.”

Feng had to push it to get to Trump National. She played in a tournament in China that was run by her sponsor last week and her flight to Beijing was delayed. She did not arrive in New Jersey until around noon Monday, and did more sleeping than playing over the next three days.

Everything worked out Thursday.

“I just had a great day so hopefully the next three days that I can perform well also and let’s see what happens,” said Feng, who has a win and three other top-10 finishes this season.

Feng was the hottest player on the tour at the end of last year, winning her last two starts and finishing eighth or better in her final seven events. She won the major LPGA Championship in 2012 for the first of her seven LPGA Tour titles.

Yang had six birdies and a bogey in her round. She took advantage of the back nine, playing it in 4 under.

The 27-year-old who now calls Orlando, Florida, home, refused to say this would be the year she won the Open.

“I’ll keep trying,” she said. “I’m playing good, you know, played good lately and I’m hitting the ball solid and making some putts, you know. I’m going to do same things, you know, next three days and see what happened.”

Ko, who had the lead going into the final round last year, was tied with Feng at 6 under after 13 holes. She bogeyed her 14th and then the last.

Ryu, the only two-time winner on the tour this year, had four birdies. Kerr had five birdies and two bogeys.

In Gee Chun, who won this event two years ago, was in a group at 70, one shot ahead of No. 3 Lexi Thompson and former No. 1 Stacy Lewis.

Amateur Rachel Heck, the 15-year-old from Memphis, Tennessee, who is the youngster player in the field, also was at 3 under with five holes to play.

Defending champion Brittany Lang had a 72 in a round where the players who teed off in the morning had the better conditions.

Michelle Wie had a 73. She was bothered by neck issues in the afternoon that required treatment on the course after the delay.