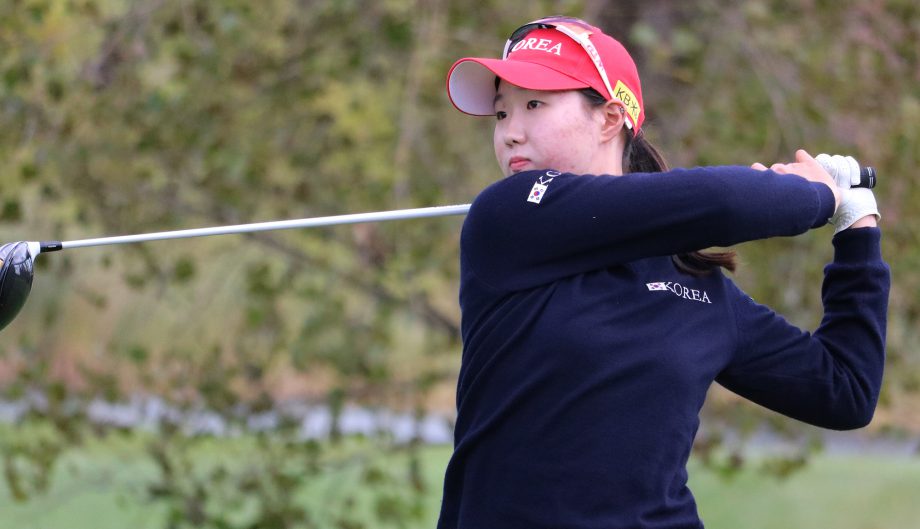 The playing conditions tightened up on moving day in the World Junior Girls Championship, with high winds bringing temperatures down 20C from the opening two rounds at The Marshes Golf Club.

Republic of Korea’s Seo-yun Kwon carded a 2-under 70 to keep the individual lead for the third consecutive day. She heads into tomorrow’s final round at 11 under for the tournament with a two-stroke advantage over Italy’s Alessia Nobilio.

“My mindset heading into tomorrow will be pretty much the same as what I have done in the past three rounds,” said the 16-year-old Kwon. “I won’t worry about what the other players are doing because I always set a certain goal for myself. So tomorrow I will do that and play for my goal.”

Nobilio carded one of two low-round 68s on the day, moving her into sole possession of second place. The 15-year-old caught fire with five-straight birdies before giving strokes back with a bogey on 13, and a double-bogey on the par-4 18th.

“I think I played perfectly until the last hole,” said Nobilio, the 41st ranked female in the World Amateur Golf Rankings. “I made five birdies in a row and my irons were always two meters from the pin, so that was my strength today. If I do my best I know that I can play good golf. I just need to concentrate until the last hole and everything will be fine.”

Nobilio’s efforts also helped lift the Italian team into a share of third place at 7 under, giving the trio a chance at what would be their first team medal at the World Junior Girls Championship. Caterina Don, who is currently tied for 26th, took home the individual bronze medal for the Italians in 2016.

“This is an important tournament for Italy,” added Nobilio. “Playing in a world championship and representing my country is just a dream for me.”

Spain carded a team-low 139 (-5) to move into second place at 10 under par, eight back of the leading Korean trio. The Koreans will look to collect their second World Junior Girls title at The Marshes – they captured the 2015 tournament here by a commanding 18 strokes.

Leading the Canadians in the field with a share of 26th at 4 over is Céleste Dao from Notre-Dame-de-L’Île-Perrot, Que.

The final round of tournament play will see players tee off at 8 a.m. Additional information and full results from the competition can be found here.