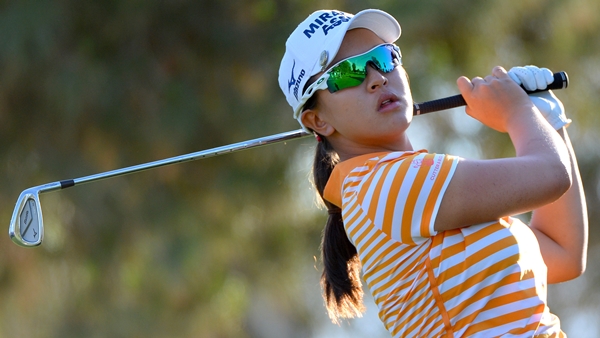 The long-hitting South Korean player shot a 3-under 69 to reach 10 under at Mission Hills with a round left in the first major championship of the year.

“If I were to win it tomorrow, it would be the biggest dream ever to come true for me,” Kim said through a translator. “I’ve watched this tournament since I was young. That’s why I feel I want it so much more. I think the opportunity is there in front of me.”

The winner Sunday will take the traditional leap into Poppie’s Pond.

“For sure, it won’t be bad jumping into that pond,” Kim said.

The 22-year-old Kim won her first LPGA Tour title in February in the Bahamas. A five-time winner on the South Korean tour, she’s making her 13th LPGA Tour start.

“I feel a little bit pressured right now,” Kim said. “Back in Korea, when I was playing on the Korean tour, I was known for coming from behind and winning tournaments. But to be in the lead going into the final round on the LPGA is fairly new for me.”

Top-ranked Lydia Ko shot a 74, her second straight over-par round after tying the LPGA Tour record for consecutive rounds under par at 29 on Thursday. She was tied for 48th at 2 over.

“I didn’t feel like it was too bad today,” Ko said. “I just couldn’t get the putts to drop.”

Ko made an 8-foot putt on 18 for her lone birdie of the round. She has at least one birdie in all 187 of her rounds in 49 career events on the tour.

Morgan Pressel, Brittany Lincicome and Ariya Jutanugarn were tied for third at 6 under. Lincicome shot a 70 after driving into the water on 18 and making a bogey. Pressel had a 71, and Jutanugarn shot 66.

Lewis birdied six of the first 12 holes to take the lead at 9 under.

“I kind of hit it all over the place, but I scored really well,” Lewis said. “Just kind of got the ball in the hole and, when I did manage to hit a fairway, I made birdie. I did a good job of staying patient more than anything and just taking what the golf course gave me.”

She ran into trouble on the par-4 15th when her drive went to the left, with a palm tree possibly saving it from going out of bounds over the property fence that runs along Gerald Ford Drive. The ball dropped into a bunker and she left her approach in the tangled rough in front of the right greenside bunker. She flopped out and missed a 25-foot par putt.

Lewis settled for a par on the 16th. After her 167-yard approach ticked the cup on the way past, she pulled her 5-foot birdie try left.

Lewis three-putted the par-3 17th for her second bogey, running her 20-foot downhill birdie try 8 feet past. She had a chance to get the stroke back on 18, but missed a 6-foot birdie putt.

“Coming in there, I didn’t make some of the best swings ever,” Lewis said. “Definitely didn’t deserve bogey on 15, so I was pretty happy making bogey there, truthfully. Seventeen, just kind of misjudged the wind and hit a wrong club there, and then the green is really bumpy down there by the hole. But all in all, it was a good, solid day.”

Tied with playing partner Kim at 8 under with three holes left, Pressel missed short par putts on 16 and 17. She lipped out a 4-footer on 16 and missed from 3 feet on 17.

Defending champion Lexi Thompson was tied for ninth at 4 under after a 71. She was 7 under with five holes left, then made three straight bogeys and closed with two pars.