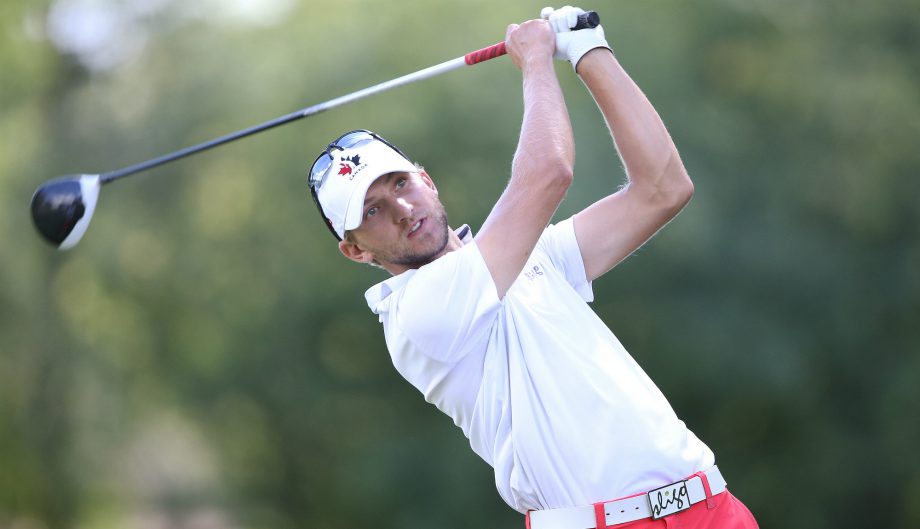 Zimbabwe’s Scott Vincent and Jacksonville Beach, Florida’s T.J. Vogel opened with a pair of 9-under 63s on Thursday at Point Grey Golf and Country Club to share the first round lead at the Freedom 55 Financial Open, the first event of the 2017 Mackenzie Tour – PGA TOUR Canada season.

The pair finished the day three strokes clear of three players in a tie for third, including Burlington, Ontario’s Blair Hamilton, Tampa, Florida’s Lee McCoy and Bakersfield, California’s Manav Shah after day one.

Vincent, a 25-year old Virginia Tech alum, pulled off the rare feat of making eagle on both his first and 18th holes of the day to shoot his best career round on the Mackenzie Tour.

“I started great, finished great,” said Vincent. “I just hit the ball really well in general. I made a few nice putts that kept the round going and kept the birdies coming.”

The second-year Mackenzie Tour member capped off the day by striking a 6-iron just below the hole at Point Grey’s par-5 18th to give himself a good look at what would become his second eagle of the day to go with six birdies and one bogey.

“The wind was a little behind, and it just set up nicely. I really struck it great to about four feet away, and just had to keep the speed up on the putt,” said Vincent of the closing
eagle.

Hamilton, a graduate of the Team Canada National Amateur Squad, is making his first start as a member of the Mackenzie Tour and fourth career start overall.

In round one Hamilton carded a bogey free, 66. He recorded three birdies on the front nine, and another three on the back nine.

The former University of Houston Cougar earned conditional status at the 2017 British Columbia QSchool and is playing on a sponsor exemption this week.

“I’m very blessed to get that exemption, but you’ve just got to treat it like it’s another golf
tournament,” said Hamilton. “I’ve been playing well and you just have to trust that you’ve put in the hard work and not worry too much.”

Just like Vincent, Vogel made the most of a hot start, recording a birdie at the par-4 11th and then rolling in a long eagle putt at the par-5 12th to get under par early. TheUniversity of Florida grad finished the day with an eagle and seven birdies to match the lead with a 63, also a career low.

“I got off to a great start. I hit it close on 11 and drained a bomb for eagle on 12, and I was able to settle down right away. I feel like my process was good today. I had a good routine and did my best not to get ahead of myself,” said Vogel.